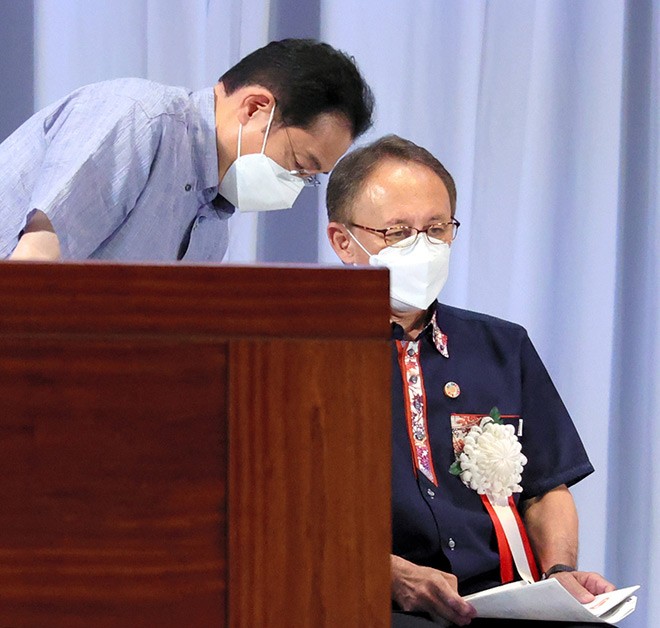 Prime Minister Fumio Kishida, left, returns to his seat after delivering an address during a ceremony marking the 50th anniversary of Okinawa’s return to Japan’s sovereignty in Ginowan, Okinawa Prefecture, on May 15. Seen next to Kishida is Okinawa Governor Denny Tamaki. (Koichi Ueda)

At the May 15 ceremony here, Tamaki’s speech did not mention the contentious issue of relocating the U.S. Marine Corps Air Station Futenma from Ginowan to the Henoko district of Nago in the prefecture.

“I will tackle issues that have not been addressed 50 years after the reversion,” Tamaki told reporters after the ceremony. “I am determined to fulfill my duty as governor while listening to the public.”

His decision not to highlight his confrontation with the central government may reflect the changing attitudes in the prefecture.

Since Okinawa’s return to Japanese sovereignty in 1972, the southernmost prefecture has been forced to bear the burden of hosting the bulk of U.S. military facilities in Japan, an approach consistently taken by each Liberal Democratic Party administration.

Okinawa’s battle to reduce the U.S. military presence has continued for decades, but the mood in the prefecture has now shifted, and a sense of resignation appears to be taking hold.

Thirty-eight percent of Okinawa voters cited promotion of local economy as the top priority issue for the prefecture, surpassing 26 percent who picked the U.S. base issue, according to a recent survey by The Asahi Shimbun and two other media companies.

Tamaki faces re-election in September. He no longer has the solid footing that he enjoyed four years ago when both progressive and conservative voters rallied behind him and his opposition to the U.S. base relocation plan.

China has intensified its maritime activities in waters near the Japan-owned Senkaku Islands in the East China Sea. And Russia, a nuclear-power neighbor of Japan, invaded Ukraine in February.

The Japanese government is increasingly convinced that strengthening its alliance with the United States is the overriding priority in ensuring its security under the current circumstances.

Defense Minister Nobuo Kishi and his U.S. counterpart, Lloyd Austin, earlier this month reaffirmed at the Pentagon that the two allies will continue to work together over the relocation of the Futenma air station.

Asked about the relocation issue by reporters after the May 15 ceremony, Kishida repeated his predecessors’ stance concerning the closure of the Futenma air station in densely populated Ginowan.

“We have explained to Okinawans that the relocation is the only viable solution and have been seeking their understanding,” Kishida said.

In his speech at the ceremony, he gave a fresh pledge that his government will work hard to curtail Okinawa’s burden of hosting U.S. military bases.

“We understand that Okinawans have shouldered the significant burden,” he said. “We, the government, take the matter seriously and will do our utmost to cut the base burden.”

He did not mention the Futenma relocation issue in the speech.

Ryutaro Hashimoto, for example, pushed for the return of the land for the Futenma airstrip to Japan, culminating in the epoch-making agreement between the two countries in 1996 to close the Futenma base.

Hashimoto’s successor, Keizo Obuchi, decided to hold the Group of Eight summit in Okinawa Prefecture in 2000 in a show of consideration to the islanders.

But the governments led by Prime Minister Shinzo Abe and Yoshihide Suga were reluctant to hold dialogue with Okinawan officials.

Their administrations also used state programs aimed at promoting Okinawa’s economy as a carrot to tame the prefectural government over the relocation issue.

Essentially, funding for the prefecture is raised or reduced depending on the governor’s stance toward the base issue.

The novel coronavirus pandemic has also dealt a serious blow to the prefecture, whose main industry is tourism.

In fiscal 2018, more than 10 million tourists arrived in the prefecture, but figures have plunged since the health crisis struck.

The Kishida administration continues to push a landfill project to build the new U.S. base off the Henoko district for the Futenma functions. Part of the reclamation work has been completed.

Although Kishida has indicated his willingness to listen to opinions from Okinawa, he has rejected repeated requests from Okinawan officials to join talks between the Japanese and U.S. governments over the base issue.

The fate of the Henoko project hinges on whether reclaiming land is possible now that a weak seabed has been detected at the site.

Tamaki and the prefectural government in November rejected the central government’s application for a change in the design of the planned landfill.

This will likely lead to another prolonged court battle over the relocation issue.

With the LDP dominating the Diet, the opposition bloc tends to be easily sidelined, even if the parties want to weigh in to help Okinawa.

Upper House lawmakers intended to adopt a resolution to mark the 50th anniversary of Okinawa’s reversion.

But it did not materialize by May 15 because opposition members added in the draft resolution that a review of the Japan-U.S. Status of Forces Agreement (SOFA) should be considered.

The LDP demanded that the addition be deleted.
SOFA, which outlines the legal standing of the U.S. military in Japan, has never been reviewed since it went into force in 1960.

(This article was compiled from reports by Keishi Nishimura, Naoki Matsuyama, Shogo Mitsuzumi and Yoshichika Yamanaka.)