Emperor hopes bright future lies ahead for people of Okinawa 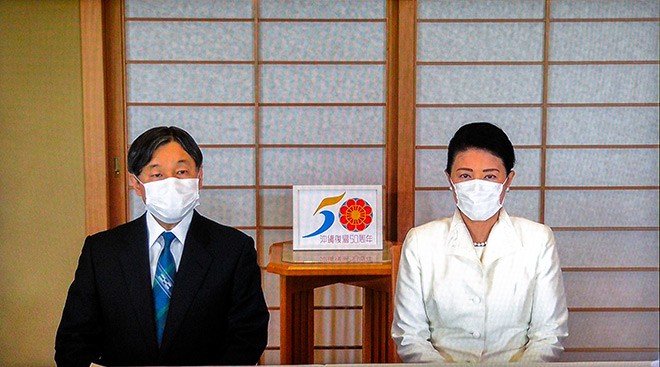 Emperor Naruhito and Empress Masako at the Imperial Palace in Tokyo remotely attend a ceremony on May 15 marking the 50th anniversary of Okinawa’s reversion to Japan. (Provided by the Imperial Household Agency)

On the 50th anniversary of Okinawa’s reversion to Japan, Emperor Naruhito expressed hope that younger generations will continue carrying on their ancestors’ wishes and efforts to help the prefecture build a bright future.

Naruhito made the remark during his address to a ceremony held in Okinawa Prefecture on May 15 to mark the half-century of its return to Japanese sovereignty. The emperor and Empress Masako attended the event online from the Imperial Palace in Tokyo.

In his address, the emperor noted that Okinawa still faces many challenges.

“I am hoping that the public at large, including the younger generation, will deepen their understanding of Okinawa and its people,” he said.

Naruhito and Masako are following in the lead of Emperor Emeritus Akihito and Empress Emerita Michiko, the couple who have stood by the people of Okinawa.

The emperor and his brother, Crown Prince Fumihito, who were both born after the end of World War II, have learned about Okinawa’s history and culture from their parents, Akihito and Michiko, since childhood.

The couple, who evacuated to areas outside urban cities during the war, visited Okinawa 11 times to mourn the war dead until Akihito abdicated the Chrysanthemum Throne in 2019.

Akihito and Michiko have also offered silent prayers on June 23, Okinawa Memorial Day, marking the anniversary of the end of the Battle of Okinawa in 1945.

At a news conference that marked his last birthday as emperor on Dec. 23, 2018, Akihito said it is important to remember that Japan’s post-war peace and prosperity were built on many sacrifices and the people’s tireless efforts and to pass on that history to those born after the war.

When they were crown prince and crown princess, Akihito and Michiko let the young Naruhito and Fumihito join their annual meeting with “mame-kisha,” children from Okinawa visiting Tokyo and elsewhere during their summer vacation to experience working as reporters.

Naruhito and Masako took over the duties after Akihito ascended to the throne in 1989. Since Akihito’s abdication, Fumihito and Crown Princess Kiko have attended the meetings with mame-kisha.

Naruhito has visited Okinawa five times. Like his father, the emperor has offered his thoughts to the people of Okinawa, saying people should never forget the hardships suffered by Okinawans.

Naruhito stressed the importance of keeping the memories of the war alive at a news conference ahead of his 55th birthday in 2015, when it marked the 70th anniversary of the end of World War II.

He said it is important to pass on “the tragic experiences of war and the knowledge on the course of history, which Japan has followed, from the generation that experienced the war to those who have grown up without first-hand knowledge of it.”

Shigeo Kawamitsu, 75, has led a group of mame-kisha on the excursions more than 10 times.

“I hope the emperor will reflect his own views and try a new approach when engaging with the people of Okinawa, while respecting his parents’ views toward peace,” said Kawamitsu.