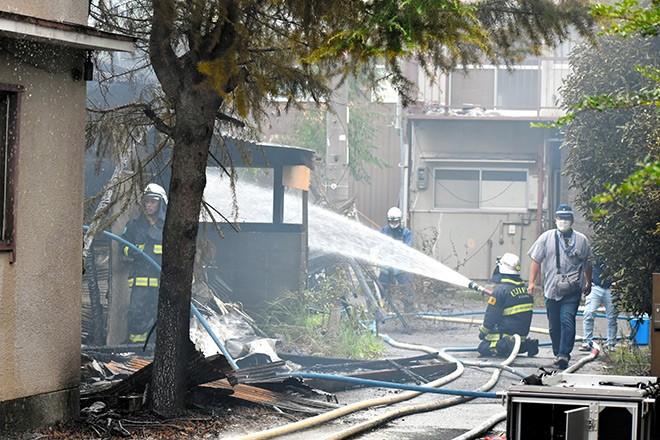 KYOTO--A 22-year-old unemployed man admitted to starting a fire that gutted seven buildings in an ethnic Korean community in Uji, Kyoto Prefecture, on the opening day of his trial here on May 16.

Shogo Arimoto, of Sakurai, Nara Prefecture, is facing charges of arson in connection with the fire last August.

“I admit to the charges as true to the fact," he told the Kyoto District Court.

Arimoto is accused of setting a fire with a lighter at an empty house in the Utoro district of Uji on Aug. 30, according to the indictment.

A total of seven building in the district were destroyed or partially damaged in the blaze.

In an interview with The Asahi Shimbun on May 13, prior to the trial, Arimoto said he acted to “intimidate and force out” Korean residents.

He had also said in previous interviews and correspondence that although he has no acquaintances among ethnic Koreans, he regards them as an “unacceptable presence” based on information he obtained on the internet and through other sources.

Koreans made the Utoro district their home after they were mobilized during World War II to build an airfield in the prefecture for Japan’s war efforts. They and their descendants continued to reside in the district in postwar years.

But their land was resold later, and the new landowner sued the residents to force them to vacate the plots.

The residents lost the court battle in 2000.

But part of the land was purchased with funds donated by their supporters in and outside Japan.

Construction of public housing for them is under way there.

The fire also destroyed about 40 items documenting the history of Korean residents in the community, such as daily supplies, a cupboard for dishes and signs used for their movement.

Some were expected to be exhibited at a building that opened in the district in April to promote interactions between Japanese and Korean residents.

Arimoto is also accused of using a lighter to damage property belonging to the Aichi prefectural chapter of an organization of ethnic Koreans and a Korean school in Nagoya’s Nakamura Ward on July 24, 2021.