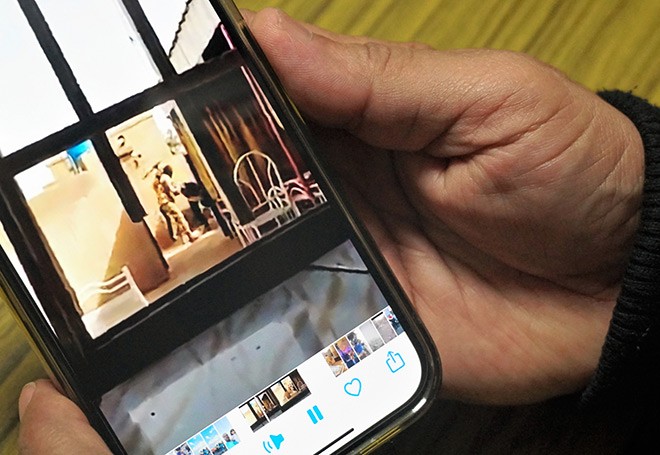 A Sudanese person who is seeking refugee status in Japan shows a video sent from Sudan, which had secretly captured an attack by militia forces, in Osaka on April 29. (Takuya Asakura)

Foreign nationals seeking refugee status in Japan and those providing support to them are raising questions about the Japanese government’s preferential treatment toward Ukrainians who fled here from Russia’s invasion of their homeland.

The showering of support and attention they have received from private companies, civic groups and various levels of government has led some to decry a politically motivated double standard, and left others simply feeling left behind to fend for themselves.

A 50-year-old man living in Saitama Prefecture expressed mixed feelings about the disparity when it comes to ease of immigration, financial assistance and other types of support that Ukrainians have received.

The man is from Afghanistan. He is a member of the minority Hazara ethnic group, who are Shiite Muslims that have been oppressed by the Taliban and the Islamic State.

“Helping the Ukrainian people is a good thing,” he said.

But he said he has felt the striking difference between the public and private support pouring out for Ukrainians compared to that of other refugees, including Afghans, constitutes “discrimination.”

In August 2021, the Taliban seized control of Afghanistan, and the chaotic scenes at the airport in Kabul of people desperate to flee the country were widely reported.

The man received many requests for help from his relatives in Afghanistan and from Afghans living in Japan who were concerned about their families back home.

He contacted Atsuko Matsuura of Sinapis, a social activity department of the Central Christian Church in Osaka, who has assisted him in the past, in the hopes of setting up an arrangement where Japan would take in some Afghan refugees.

“There are some people who used to belong to the former government’s military, and the lives of some of them are really in danger,” he told Matsuura.

Matsuura had contacted people in Afghanistan through communication apps while negotiating with the Foreign Ministry and immigration officials.

“I felt that the Japanese government, particularly the Foreign Ministry, was willing to do something initially,” Matsuura recalled.

But as Japan tightened its border control measures in late November to prevent COVID-19 variants from spreading rapidly throughout the country, the government became slow to respond to the issue, Matsuura said.

The Japanese government has implemented measures to allow Afghans who are currently in Japan to continue to stay.

But it is a rare occasion when the Japanese government issues a visa to an Afghan, except to those who with ties to the Japan International Cooperation Agency  (JICA) and other similar groups, even when he or she has a guarantor in Japan.

It is in stark contrast compared to the Ukrainian evacuees who flew to Japan on the Japanese government’s own plane or with the private-sector aircrafts' seats it chartered.

Matsuura said some of the Afghans she has supported fled to a neighboring country but are now stranded there because the Japanese government has not issued them visas.

Matsuura has urged foreign countries' embassies in Japan and foreign missionaries to take these stranded people.

“We will take care of the travel and living costs,” Matsuura told them.

The man said many people were killed and injured in an explosion in April at a high school in an area where many Hazara people live in Kabul.

The Japanese government has called those fleeing from Ukraine “evacuees” and allowed them to enter Japan. This is a different status from being called a “refugee,” a category designated by the justice minister based on the Convention Relating to the Status of Refugees.

Signed in 1951, the convention defines a refugee as: “Someone who is unable or unwilling to return to their country of origin owing to a well-founded fear of being persecuted for reasons of race, religion, nationality, membership of a particular social group, or political opinion.”

In recent years, an understanding has been widely shared in the international community that those who flee from a conflict can be defined as a refugee.

But the Japanese government has interpreted the definition narrowly, deeming the Ukrainians not refugees as defined by the convention.

And there are major differences between evacuees and refugees in terms of support provided after entering Japan.

The government has promised to provide Ukrainian evacuees with hotel rooms and meals, as well as a lump-sum allowance of 160,000 yen ($1,240).

For those 12 or older, the government has promised to provide 2,400 yen per day for living expenses.

Many local governments have also offered support to Ukrainian evacuees.

For instance, the Osaka city government is expected to provide 500,000 yen in financial assistance to each household in addition to the housing it is providing.

Private companies and foundations have also promised to provide financial and other means of support to the Ukrainian evacuees.

“It is an unprecedented support boom,” one lawyer said.

Japan rolling out the red carpet for people fleeing Ukraine like this was practically unthinkable for many who have long worked and struggled to help bring refugees from elsewhere to Japan.

The Refugee Assistance Headquarters, commissioned by the central government, operates a system that provides living expenses to those who come from elsewhere and apply to Japan for refugee status.

But the amount of financial support is a meager 1,600 yen per day, two-thirds of what the Ukrainian evacuees receive.

To receive the 1,600-yen daily allowance, an applicant must first do an interview and have a bank account confirmed.

An applicant must fall under considerably impoverished circumstances to receive the allowance, too.

The number of people the central government granted refugee status to in 2021 was 74, a record high.

The figure was up 27 from the previous year, but it is still a paltry figure compared to other major countries.

Many people have repeatedly filed applications to gain refugee status and had to resort to fighting legal battles.

It often takes a long time to obtain refugee status in Japan.

During the application period, many manage to get by just on support from volunteers and illegal work.

While the world’s attention is currently heavily focused on Ukraine, conflicts, coups and human rights violations occur all around the globe.

Rafiq, a support organization in Osaka, has supported six people from Sudan seeking refugee status since October 2021, when the military executed a coup.

The United States decided to grant residency status to all Sudanese already in the country and has allowed them to work in the country.

But the Sudanese that Rafiq has supported have not been deemed refugees.

They have filed a lawsuit demanding a retraction of the decision and reapplied for refugee status.

“I am happy to see the movement to protect Ukrainian people. But there are many other people who have fled a coup or a dictatorship and have been unable to return to their home countries,” said Keiko Tanaka of Rafiq. “I want this kind of support to be applied to them, even if just a little.”

Some people who have supported refugees in Japan said the assistance Japan is providing to Ukrainians is politically motivated.

The central government “wants to play cool on high-profile issues because there is an Upper House election in the summer,” one supporter said.

Koki Abe, a professor of international law at Meiji Gakuin University, said during an online symposium on April 23 that accepting Ukrainian evacuees is an “extremely political decision under the guise of humanitarian support.”

Abe said the central government’s decisions were made with the intention of clarifying its stance “in relation to Russia, NATO and the United States.”

But at the same time, some good has come out of that decision through helping the Ukrainians, and it poses new opportunities as well.

“It is great that there is increasing interest in refugees,” he said, and urged the public to “learn about the many refugees in Japan and seize this opportunity to help them.”