TASTE OF LIFE/ Simmered satoimo yam and chicken: Find confidence in cooking with this simple yet delicious recipe 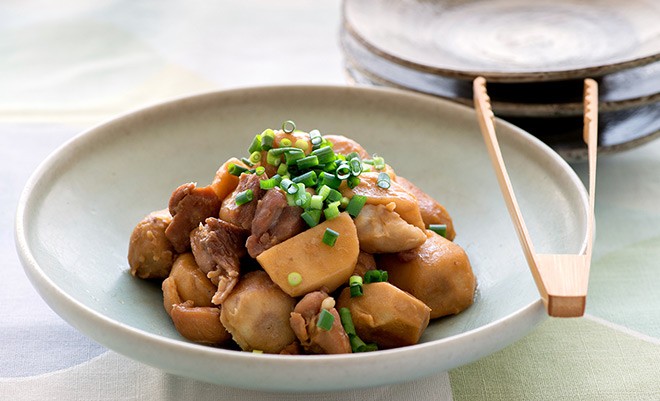 She is actively involved with The Big Issue Japan, a magazine launched in 2003, which assists those living on the streets gain financial independence. Homeless people purchase the magazines and sell them on street corners.

“Offering them a job to sell the magazine is an impartial and clear way to be involved in helping them, in contrast to just thrusting support at them," Edamoto said. "That is what I liked about it.”

When the magazine contacted her for a feature on food soon after its launch, she offered to be of assistance.

“It was my very first sales effort.”

She now has a series where she introduces “dishes that alleviate worries” to accompany a column where the magazine sellers respond to readers seeking personal advice.

When a company employee in his 40s wrote that he “does not feel confident in anything,” Edamoto suggested he take up cooking.

“Even if it is a simple dish, experiencing how good it tastes alone will give you confidence,” she said. The dish she introduced back then was simmered satoimo yam.

The procedure is simple--all it takes is peeling the skin and simmering it.

“Chefs of Japanese cuisine and recipe books mention things like parboiling and ‘roppo-muki’ (‘six-side’ peeling method’ where satoimo and other vegetables are peeled so that they look like rounded hexagonal columns), but this procedure I learned from a farmer’s wife tastes the best,” she said.

This time, she added chicken to the dish.

“I think it is fine to do things your way and not worry too much.”

Edamoto began working on the “Yoru no panya-san” project in 2020. The project, which means “bread shop at night,” involves collecting bread likely to remain unsold from participating shops and selling them at different spots from the evening. It is an effort to create jobs through food that generates income and places to work.

“Having to throw away food when a certain time comes is a societal problem,” Edamoto said.

The public can no longer carry on the loop of mass production, mass consumption and mass disposal, she said.

“I want to question and change this system. I will move like a turtle toward a new set of values,” said Edamoto.

Nahomi Edamoto is a cooking expert born in Yokohama in 1955. Her books include “Edamoto Nahomi no riaru asa gohan.” She is a joint representative of the authorized NPO The Big Issue Japan Foundation.

1. Peel satoimo and cut into bite-size pieces. Remove fat and tendons from chicken and cut likewise.

2. Bring Seasoning A to a boil in a pot, add ginger, chicken and satoimo. Place drop lid and then lid of pot and simmer for 10 minutes over medium heat.

3. Turn over ingredients, check the state of the food and simmer for another 5 to 10 minutes on low heat. If water content is lacking at this stage, add about 1/2 cup water. Total simmering time should be about 15 to 20 minutes.

About 285 kcal and 2.1 grams salt per portion
(Nutrition calculation by the Nutrition Clinic of Kagawa Nutrition University)

Although there appears to be little simmering liquid, the satoimo yam provides more water than expected. Since the amount of evaporation varies depending on the pot, keep an eye on the pot at the final stage so it does not burn.

(This article was written by Mika Omura and Miki Kobayashi)