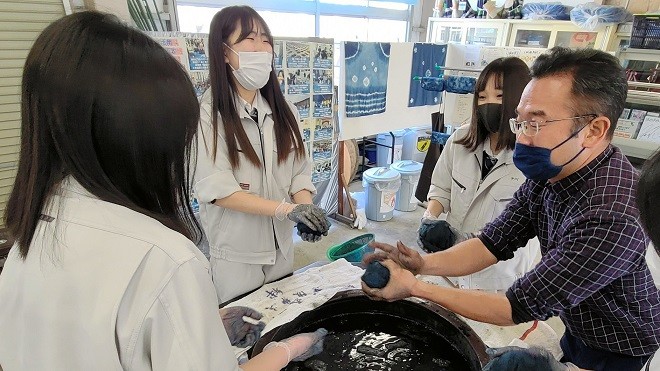 TOKUSHIMA--A high school here created a special Awa Ai team that began taking lessons in fiscal 2010 from artisans who use an indigo dyeing method that is on the verge of extinction.

Shunsuke Yamao, a third-year student at Tokushima Prefectural Josei Senior High School, touched on why he likes the lessons.

“That what we are doing will help the next generation gives me a sense of achievement,” he said.

The indigo plant is grown and harvested for dyeing, and products featuring the dye are developed and sold.

Chemical-free items featuring the long-established skill have been adopted for uniforms of businesses and groups in the prefecture. Tying up with a yoga gear maker and seller, ethical fashionable articles have been pitched as well. Face masks have also been created and marketed based on the technique.

The special Awa Ai team is from the school’s plant utilization department.

Kazuo Kawanishi, 49, a teacher who worked at the school until March, explained how exceptional such offerings are.

“All the materials are natural, so it takes a lot of time and labor to finish the products,” Kawanishi said. “The hard work means the products boast such excellent quality that we hesitate to sell them.”

Taking advantage of each school’s characteristics, children are involved in a range of programs to spread consumers’ awareness of the topic.

The prefecture is looking to be an “advanced prefecture” in the ethical-consumption movement.

The local government introduced Japan’s first ordinance in October 2018 urging its citizens to act ethically, and the consumption principle was adopted at educational facilities across the prefecture.

In Japan, the campaign is spearheaded by the Consumer Affairs Agency.

The central government body set up its regional center in Tokushima in July 2017. This led Tokushima Prefecture, which was then lobbying to accommodate the Tokyo-based agency after its envisioned relocation, to boost its own measures.

The concept of ethical consumption is said to have been born from Ethical Consumer, a British specialized magazine first published in 1989 to help inform consumers’ ethical attitudes.

Growing public awareness of companies’ social responsibilities, along with poverty and environmental issues during the 1980s, helped give rise to the trend.

More recently, ethical consumption has been drawing attention in connection with the target of ensuring “sustainable consumption and production patterns” as set by the U.N. Sustainable Development Goals (SDGs).

Tokushima Prefecture in 2019 started providing an opportunity for high school students across the country to present their activities and accomplishments linked to ethical consumption in the form of a competition.

The third contest took place in March this year.

Eighty-five schools throughout the nation applied for the event. Of these, 11 schools, including representatives of eight regions nationwide, qualified to compete in the final round in Tokushima.

The top prize was awarded to Tokushima Prefectural Johnouchi Junior and Senior High School in Tokushima.

Many people in and outside the school appeared to struggle to determine “which products and services out there are more ethical,” according to some of the school’s students.

One single product can be characterized by more than one element, such as fair trade and being organic. Careful research is essential for consumers to decide how certain offerings are better from the perspective of ethical consumption.

With this in mind, the students developed a smartphone app to assess products and services. They devised unique indicators from the standpoint of “community,” “people and society” and “environment,” making what advantages respective items have clear under the categories.

Tapping on products on the screen summons a honewort icon whose leaves are differently colored to show evaluation results via a hue arrangement, allowing users to quickly discern the product’s benefits.

The app aims to provide producer information and stimulate consumers’ appetites. The students said they interviewed product makers on many occasions to continually improve the app.

Karin Fujikawa, a senior at the high school who was involved in the app’s development, noted the program helps consumers and producers reflect on ethical consumption.

“Producers admired our brainchild for offering them an opportunity to think of ethicality,” said Fujikawa.

“We will continue working on the app to have more products registered on it.”

A member of the judging panel for the contest highly appreciated the app.

“Though barometers for ethicality are difficult to develop through only uniform standards, (the school's) extremely brilliant creativity and technique rendered it possible to overcome the challenge by incorporating information and communication technology,” the judge said.

CONTRIBUTING TO THE LOCAL COMMUNITY

The ethical consumption drive is spreading among schools outside Tokushima Prefecture as well.

The Nara Information and Commercial High School and the Nara Kensho High School organized an exchange event with elderly people, called the Reiwa version of Tsubaichi, which was the largest ancient market in Nara Prefecture.

The sales proceeds from products made by elderly citizens were used to fund another campaign to address financial problems involving women who can’t afford sanitary items.

As the prefecture-run school is in Sakurai city in Nara Prefecture, it sought the help of the municipality and the city’s education board to distribute feminine hygiene products free of charge at junior high schools and at city hall.

Kokoro Hamaguchi, a second-year student member of the project, said it was hard work but proved rewarding in the end.

“It was tough for us to work closely with authorities,” said Hamaguchi. “When we received a letter of appreciation from junior high schoolers, though, I could see firsthand that we are contributing to the local community.”

The Miyagi Prefecture Agriculture High School cultivated cosmos flowers to coincide with a marathon event held in an area devastated by the 2011 Great East Japan Earthquake and tsunami, utilizing a fertilizer generated from the lumbering process of locally produced cedar.

Hideki Nakahara, a professor emeritus of sustainable consumption studies at Tokyo City University, who was head of the judging panel, praised the high schoolers’ high level of consciousness of ethical consumption.

“The presentations are so good that all their proposals can serve as business models to inspire the market,” he said.