Man who got 46.3 million yen by mistake blew it on casino sites 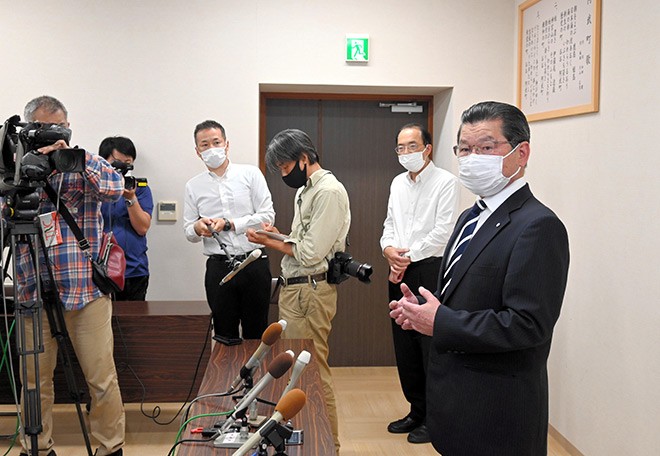 Abu Mayor Norihiko Hanada speaks to reporters at the Abu town government office in Yamaguchi Prefecture on May 17. (Michiya Ofuji)

ABU, Yamaguchi Prefecture--A man who was mistakenly sent 46.3 million yen ($358,140) in COVID-19 relief funds by his town said he had gambled the money away on overseas casino sites, his lawyer reported on May 17.

The lawyer had said the previous day that the man has already spent all the money.

The town of Abu had accidentally sent him the funds in addition to the 100,000-yen financial aid package to be distributed to 463 local households last month.

Abu Mayor Norihiko Hanada told reporters May 17 it would be “unforgivable” if the man actually gambled all the money on casino sites.

He said it was hard to imagine that such a large sum of money had been lost in one go.

The man voluntarily agreed to be questioned about the matter by prefectural police officers, according to an attorney who represents him.

At a news conference on May 16, the attorney revealed that the man had explained to him that it is all gone.

“He spent all (of the 46.3 million yen) by using his smartphone,” his attorney said.

The attorney added it would be difficult to return the funds and that the man’s smartphone has already been voluntarily submitted to prefectural police.

According to the attorney, the man is cooperating with police. He responded to the prefectural police’s request to appear voluntarily to explain his circumstances in late April, and then again on May 10, after the town’s banking blunder came to light. The man has reportedly agreed to continue to be questioned.

Municipal officials filed a lawsuit on May 12 with the Hagi Branch of the Yamaguchi District Court demanding the man return all the funds.

When the town filed the lawsuit against the man, officials said they had been unable to reach him and could not locate him.

They explained that the money was transferred out to other bank accounts through a series of transactions, some of which were for settlement of card payments.

They said nearly all the money had been drained out of his account within a short period of time.

The attorney said he met with the man on May 13, the day after the lawsuit was filed, and was asked to represent him, and added that he has been in touch with him.

“After checking the complaint, we will consider the matter so that it can be resolved,” the man’s attorney said.

(Natsuno Otahara contributed to this article.)