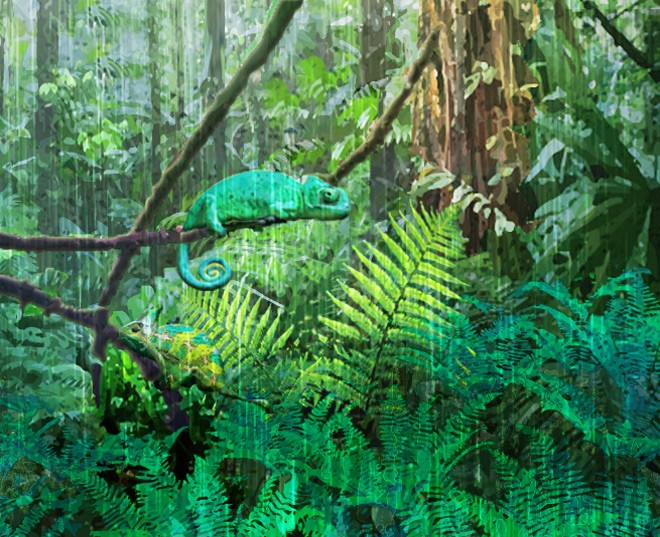 the used umbrella
waiting for the sky
to (d)rain
--T.D. Ginting (Murakami, Chiba)

Spring cleaning
one by one my windows
disappear
--Lee Nash (Poitou-Charentes, France)

The haikuist watched horticulturalists clip wet foliage and lush shrubs to recreate a fanciful swampland resembling prehistoric times when Tyrannosaurs and other carnivorous raptors roamed Japan. Ram Chandran lives along the green banks of the Vaigai river in Madurai, one of the oldest cities in India.

Ken Sawitri roamed the rainforests of Blora, Indonesia, to find cocoons wrapped in withered teak tree leaves. Cooked fresh, the haikuist said Javanese “ungker” makes for “a delicious meal—served along with boiled rice—to celebrate the coming of the rainy season.”

a shaken branch
the thuds of green
mangos on the grass

first irises
under the feathers of the stork
two eggs

There was too much crunch in Roberta Beach Jacobson’s lunch in Indianola, Iowa. Masumi Orihara described an unforgettable dish of whisked eggs from an organic farm in Atsugi, Kanagawa Prefecture.

all of human history
when the umpire whisks
home plate

Goran Gatalica recalled growing up in the small town of Daruvar, Croatia.

Childhood…
my dad’s hunting clothes
in the spring rain

Slobodan Pupovac celebrated life in Zagreb, Croatia. Evetts celebrated his own birthday today by marveling at the audacity of Ukraine’s youth in clamoring for Russian soldiers to return home. Yutaka Kitajima transliterated a Ukrainian protest from a spunky elderly woman.

spring rain
tap-dancing
on a tank

Evetts wrote this proverbial truth to express his sentiments before blowing out the candles on his cake.

plum rain
how memories mellow
with the years

Angela Giordano needed some time before returning to Avigliano, Italy.

John S. Gilbertson thought he had paid too much for a fancy umbrella at a shop on West 57th in New York City.

expensive kasa
yet the last laugh is mine
Kyoto during tsuyu

through the car window
the homeless man
hands one white rose

light rain
under the blossoming cherry
hobo with guitar

Gatalica grieved for an unknown soldier in Zagreb. Kanematsu was stirred by a sudden spring wind that rotated toy weathervanes standing at a cemetery for young loved ones.

Angelo B. Ancheta sowed in Rizal, Philippines, when a new president was elected. Luciana Moretto repotted houseplants in Treviso, Italy.

scattered seeds
all over the backyard...
end of war

This May 26, Lee Nash might offer prayers in Poitou-Charentes, France, to celebrate Jesus Christ’s ascension to heaven.

Ascension
the unsent letters
in my head

Neo wrote a haiku to explain how hard he is working hard as a newly hired computer software programmer in a high-rise office building in Shenyang, China.

Searching for a peaceful place, a tropical butterfly came in from the wilderness to rest for a while with Roberta Beach Jacobson. Gordana Vlasic felt a little uneasy with her roommate in Oroslavje, Croatia.

sharing
terrace greenery
with a morpho

gust of wind...
the spider in my room
looking for a place

Mirela Brailean turned to see someone watching her.

hunted hunter
feeling of being watched from behind
wolves’ eyes

another lockdown--
through my barred window
winter moonshine

how often the chameleon
rolls off the green
spring canopy

The next issues of the Asahi Haikuist Network appear on June 3 and 17. You are invited to send a haiku about a postage stamp or your favorite courier on a postcard to David McMurray at the International University of Kagoshima, Sakanoue 8-34-1, Kagoshima, 891-0197, Japan, or e-mail to (mcmurray@fka.att.ne.jp).