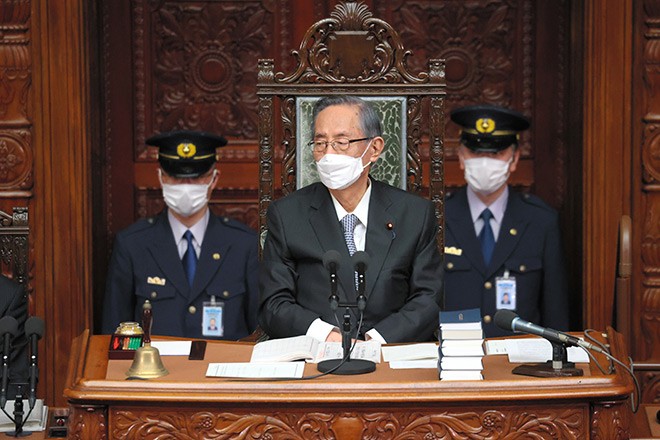 Lower House Speaker Hiroyuki Hosoda is apologizing for saying the monthly salary of Diet members is “only” 1 million yen ($7,700).

It comes after his remarks set off a social media firestorm for making it sound as if lawmakers are underpaid.

He made the statement when attempting to justify increasing the number of lawmakers in the Diet.

“Even if you become a Diet member, you are only paid 1 million yen a month,” he said at a party for Upper House members on May 10. “Presidents of listed companies are always paid 100 million yen at least.”

He then said, “Adding a few more members to the Diet is not a punishable offense, then.”

But once media reported his comments, Hosoda fell under intense criticism for sounding out of touch with the public.

Lawmakers from opposition parties were even joined by members of the ruling coalition in rebuking his comments.

“The Diet could be criticized, too, for choosing him as its speaker,” said a senior official of junior coalition partner, Komeito.

Hosoda apologized for his comments at a meeting among senior members of the ruling and opposition parties held at the speaker’s official residence on May 12.

“I will refrain from commenting from now on,” he reportedly said.

His remarks appear to have been prompted by dissatisfaction with the government’s plan to rezone electoral districts.

The government has been working to revise Lower House electoral districts by adding 10 seats while removing another 10 seats across 15 prefectures, including Tokyo, to fix disparities in vote weight to ensure the electoral system is fair regardless of where a voter resides.

However, some in the ruling Liberal Democratic Party, including Hosoda, have been publicly expressing dissatisfaction with the idea.

Some lawmakers in both the ruling and opposition parties have been unhappy with what some call the “painful reforms” the government has been implementing.

When the Lower House was dissolved in 2012, the LDP, Komeito, and the now-defunct Democratic Party of Japan which was in power at the time, agreed to slash the number of Diet members to make the consumption tax hike more palatable to the public.

Japan does not have as many lawmakers as other major countries per population.

According to data from the Inter-Parliamentary Union and population statistics of the United Nations, Japan has one Diet member for every 180,000 people.

But when it comes to comparing their salaries, it all depends on how the numbers get crunched.

Currently, Diet members make around 1.04 million yen monthly, a figure that has been reduced due to the COVID-19 pandemic--putting them at around 12.5 million yen a year.

The annual salaries of members of the U.S. Congress, according to the IPU data, work out to about 22.5 million yen when converted at the latest exchange rate.

Britain's House of Commons members, meanwhile, are paid 12.98 million yen, while there is no salary for lawmakers of the country’s House of Lords, although they are entitled to expenses and allowances.

However, lawmakers in Japan are also paid allowances in addition to salary, which can make it an apples-to-oranges comparison when comparing their salaries directly with those of their international counterparts.

Combined with their “end-of-term allowance,” their pay is around 19 million yen annually. On top of that, they are also paid 1 million yen a month in expenses for research, study, public relations activities and accommodations--which critics refer to disparagingly as a “second salary.”

A senior member of the LDP said they have a hard time explaining to the public that their pay is relatively low.

“The public cannot understand it when we say lawmakers have a small salary,” the senior member said.

Masao Matsumoto, a professor emeritus of political science at Saitama University, said the criticism thrown at Hosoda largely comes from the public’s distrust of politicians.

(This article was written by Amane Sugawara and Haruna Shiromi.)