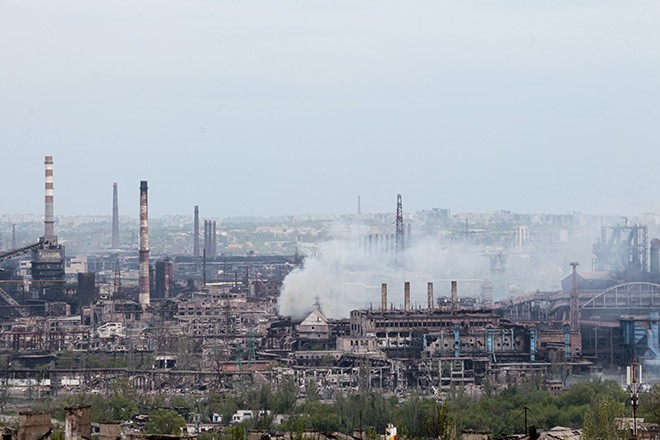 Smoke rises from the Metallurgical Combine Azovstal in Mariupol, Ukraine, on May 5. (AP Photo)

The Sea of Azov, north of the Black Sea, is known as the shallowest sea in the world, with a maximum depth of only 14 meters. The sea is famous for sturgeon fishing.

In the 18th century, a beautiful town was built on the north coast, and the Russian empress of the time named it Mariupol--"Maria's Town."

Its evolution into one of the top industrial centers in Ukraine was supported by the Azovstal iron and steel works. The name means "Azov's steel."

The Soviet Union built a shelter against nuclear attacks in Mariupol during the Cold War. With its maze-like networks of deep underground tunnels capable of accommodating tens of thousands of people, the shelter turned Mariupol into a veritable fortress town.

The entire world is now watching this town, the name of which was not even mentioned until this past February.

Russian forces are laying siege to the Azovstal factory, with Ukrainian refugees inside.

Media reports on children living in the murky basement, saying they longed to "see the sun" and "survive the ordeal," filled me with anxiety.

In video footage released by Russia to flaunt its military achievements, black smoke covered the Azovstal factory while incendiary bombs rained like fireworks.

Although these images felt unreal and reminded me of video game scenes, I still could not help but think about the despair of Ukrainians, civilians as well as soldiers, sheltering from the Russian onslaught.

The Eurovision Song Contest never fails to excite Europeans. At its Grand Final 2022 last week, the six-member Kalush Orchestra representing Ukraine called to the audience, "Save Mariupol! Save Azovstal now!"

The group had just won the contest and made such a painfully heartfelt plea from the stage.

But their prayer probably went unanswered, as the fall of Mariupol was already imminent.

I understand that next year's Eurovision Song Contest will, as a rule, be held in the country of this year's winner.

I tried so hard to imagine a Ukrainian town filled with songs in various European languages one year from now.

But I just couldn't.