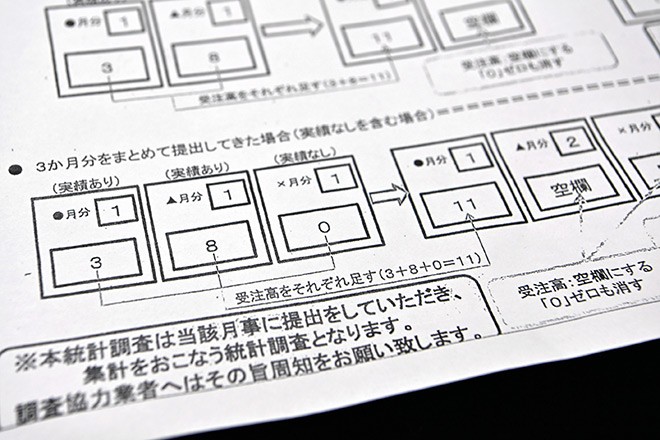 It has come to light that the land ministry engaged in improper data processing for years, massively overstating its annual construction order statistics by trillions of yen.

Given this inexcusably shoddy mishandling of the nation's fundamental statistics, the government can no longer be trusted to formulate honest policies. Cleaning up its act should be one of the government's top priorities now.

The Asahi Shimbun first reported the falsification of data in December.
A panel of experts, appointed by the land ministry, analyzed the impact of the inflated statistics and issued a report last week.

Due to wrongful double-counting, according to the report, the value of construction contracts for fiscal 2020 was overstated by 3.6 trillion yen ($27.86 billion).

The report also pointed out that double-counting began in fiscal 2013, and that the discrepancy between the actual and inflated numbers from that year through 2019 may have been even greater than in 2020.

The nation's Statistics Law designates construction contract statistics as one of the "fundamental" statistics that are "especially important" and "used extensively."

We must say that by falsifying them, the government damaged the trustworthiness of all public statistics.

Statistics not only form the basis of government programs and their implementation, but are also used extensively by private institutions in their decision-making and research.

The land ministry's responsibility is grave for having effectively tried to cover up the data padding until it was discovered.

Correcting the numbers now will have to rely on estimation, as the original order records were also rewritten on purpose.

The panel's report explains how the estimation should be done, and the land ministry must proceed with the work without delay.

As well, a complete overhaul of the present system of statistics compilation is vital.

The system's flaws have already been pointed out. They include staff shortages and lack of expert knowledge among officials in charge; the absence of coordinators who were familiar with the entire process; incomplete or disrupted information; and the nature of the land ministry itself, which is prone to evading responsibility.

The ministry must do everything in its power to prevent a recurrence.

The government as a whole, too, needs to show contrition for the repeated wrongdoing and strive harder to implement corrective measures.

When falsification was detected in health ministry statistics in late 2018, the government proceeded to reform its statistics-related operations and conducted a sweeping examination of fundamental statistics.

But the land ministry's inflated figures were not caught at the time.

Still, reform measures that were recommended then included securing sufficient staff for the work volume and grooming the staffers for posts that require expertise and a sense of responsibility.

All these measures are what the land ministry sorely needs.

In response to the scandal, the internal affairs ministry, which oversees application of the Statistics Law, announced its intention in January to order every government ministry and agency to examine their procedures for the compilation of fundamental statistics.

This renders it highly doubtful that the problem can ever be eliminated for good. The government needs to understand that no matter how many times it rattles off a lofty slogan, it will never regain the trust of the public in the absence of concrete action.