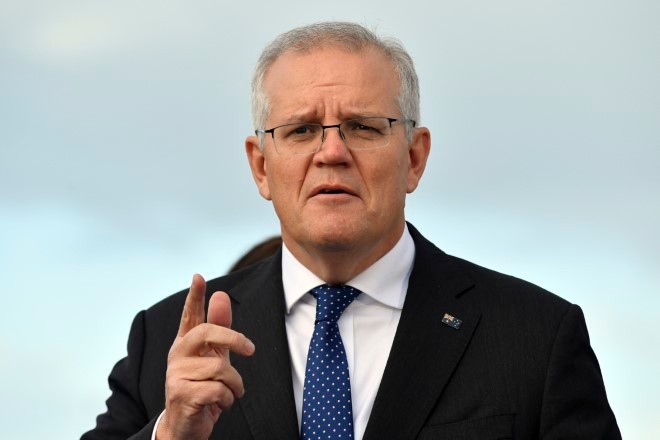 CANBERRA--Australia’s Prime Minister Scott Morrison on Wednesday would not say who might represent the nation at a summit with U.S., Indian and Japanese leaders in Tokyo just three days after Australian elections on Saturday.

Prime Minister Scott Morrison said there were “conventions in place” to deal with the election but did not elaborate on how those conventions would work if the result were close.

“I’m sure depending on the outcome of this Saturday’s election that they’ll be put in place,” Morrison said.

Opposition leader Anthony Albanese has said he would have himself sworn in as prime minister as soon as Sunday or Monday in order to attend the summit of the Indo-Pacific strategic alliance known as the Quad on Tuesday.

“I will visit the Quad and renew my acquaintance with President (Joe) Biden but also meet, very importantly, with (Japanese) Prime Minister (Fumio) Kishida and (Indian Prime Minister) Narendra Modi who are important friends of Australia,” Albanese told The Australian newspaper.

Caretaker conventions have constrained what the government can do since April 10 when Morrison called the election. But conventions are not binding.

“The caretaker conventions in those circumstances would normally dictate that you can’t go around doing significant things, making policy announcements and that sort of stuff,” she added.

Morrison and Albanese could go to Tokyo together if the election result seemed uncertain, she said.

The published conventions provide a range of options for a caretaker prime minister undertaking an overseas visit or international negotiations.

The prime minister could adopt “observer status” at the Tokyo summit or seek opposition support for any negotiating positions.

“The first visit will be to Japan for the Quad leaders’ meeting which a number of foreign ministers are also attending,” Wong told Australian Broadcasting Corp. last week.

“My hope would have been, and Anthony has said if we were elected his first visit and certainly my first visit would be to Indonesia. But obviously the first visit for him overseas would be the Quad leaders’ meeting in Japan,” Wong said.

Indonesia is traditionally the first overseas destination of a new Australian prime minister to underscore the importance of that bilateral relationship.

It’s usually clear on the night of Australian elections which party will win a majority of seats in the House of Representatives and form government.

But opinion polls suggest the weekend election will be close and could result in a hung parliament in which neither the conservative coalition nor the Labor Party holds a majority.

There is also an increase in postal votes at this election as electors avoid the pandemic risk at polling booths. Postal votes take longer to count.

It took Labor 17 days after the 2010 election to secure the support of enough independent lawmakers to form a minority government.