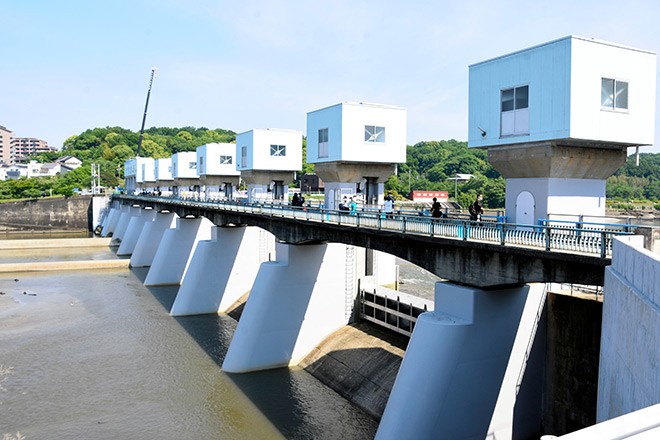 Meiji Yosui Toshuko, a dam in Toyota, Aichi Prefecture, on May 18 (Hirohisa Yamashita)

NAGOYA--A major water leak occurred at a dam in Toyota city on May 17, affecting the operations of rice farmers and companies, including many in the auto industry, officials said.

The cause of the early morning leak at the Meiji Yosui Toshuko dam remains unknown, and the prospect of repair is uncertain, Aichi prefectural government officials said.

The dam provides water from the Yahagigawa river to 131 companies located in nine cities, including Toyota and Okazaki, and three towns in the Nishi-Mikawa region.

About 100 of the companies are large-scale ones, and many of the factories on the list are related to Toyota Motor Corp. and other automobile companies.

The prefectural Anjo water filtration plant, which takes water from the dam, cannot secure a sufficient amount of water because of the leakage.

Water intake at the Anjo plant was suspended at 4:45 a.m. on May 18. That means the plant’s water supply to factories in the region was expected to be suspended by the end of the day, officials said.

According to prefectural officials, the supply of agricultural water to eight cities, including Toyota and Okazaki, was suspended in the early afternoon of May 17.

The interruption has already affected farmers’ schedule of rice planting.

But it has not affected general households, officials said.

Toyota has started checking the impact of the leakage on its factories in the region. The automaker said its factories have been operating normally so far by using well water.

However, the company has encouraged employees to work from home to save water.