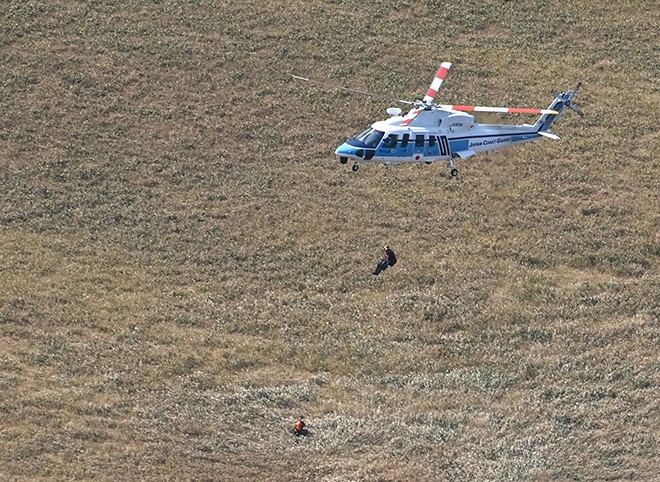 A Japan Coast Guard helicopter deploys a rescuer near Cape Shiretoko at the northern edge of the Shiretoko Peninsula in Hokkaido on April 24. (Sayuri Ide)

The Japan Coast Guard is considering expanding its rescue capabilities across the country following the sinking of a tour boat off Hokkaido, in which it took more than three hours to respond to the distress call.

The Coast Guard aims to rectify the current situation after the Kazu I tour boat sank outside areas it has designated as those it can reach within one hour.

Rescuers could not arrive at the site off the Shiretoko Peninsula on April 23 quickly enough to save the 26 passengers and crew aboard.

Hokkaido Governor Naomichi Suzuki emphasized the need to enhance rescue capabilities in a meeting with Tetsuo Saito, transport minister, in Tokyo on May 17.

“Mobile rescue technicians or other officials cannot currently reach wide areas of the sea east or north of Hokkaido within one hour,” he said while pointing to a map.

Coast Guard mobile rescue technicians are entrusted with rescuing people--they descend from a helicopter or dive during rescue operations. Around half are qualified paramedics.

They hurry to the scene when the Coast Guard receives a distress call from those involved in an accident at sea.

The Coast Guard deploys 81 mobile rescue technicians across Japan, with nine at each of its nine air stations.

It has designated areas of the sea within a radius of about 185 kilometers from the nine air stations and the Haneda special rescue station in Tokyo as those it can reach within one hour to respond to an accident.

This covers most of the sea off the coasts of Japan, according to the Coast Guard.

However, the wider areas of the sea off the coast of Hokkaido are outside these so-called “one-hour-mobilization areas.”

There was a 450-km, straight-line distance between the Coast Guard's Hakodate air station, which is its only air station in Hokkaido where mobile rescue technicians are deployed, and where the Kazu I sank, making it difficult to fly there quickly from the station.

The Kushiro air station is responsible for the area of the sea where the tour boat sank. The station is around 160 km from the site of the accident.

Divers who can rescue people from the sea and help them board a helicopter are deployed at the nearby Kushiro Coast Guard Office.

However, both of the helicopters deployed at the Kushiro air station could not be used when it received a distress call from the Kazu I at 1:13 p.m. on April 23. One of the aircraft had been removed from service for maintenance and another one was out patrolling.

The latter arrived at the accident scene at 4:30 p.m. that day after returning to the Kushiro air station to be fueled and bring divers aboard.

Another helicopter that had mobile rescue technicians board at the Hakodate air station arrived even later because it had to be fueled at the Kushiro air station.

The Coast Guard said 12 of its 14 air stations across Japan have two helicopters each to use for rescue missions.

However, because each helicopter is taken out of service for repairs or maintenance some 150 days a year, the air stations quite often only have one helicopter available.

Toyama said ideally each air station should have three helicopters.

He also said the one-hour-mobilization areas should be extended by deploying mobile rescue technicians at air stations that don’t have them now, including the Kushiro air station.

“While the day-to-day operations of the Coast Guard are not as visible as operations to patrol the sea around the Senkaku Islands or to deal with major natural disasters, for example, we need to learn from the Kazu I accident and strengthen our rescue capability,” he said.

In light of the time it took the Coast Guard to arrive at the scene where the Kazu I sank, the government is planning to expand the number of its mobile rescue technicians and helicopters.