Okinawan with American father finally finds her own identity 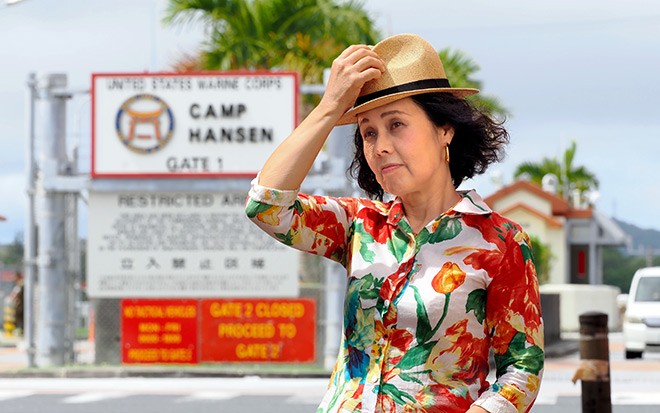 Malia Higa visits a neighborhood near a U.S. military base in Kin, Okinawa Prefecture, on May 7. She said she grew up here when she was an elementary school pupil. (Shoma Fujiwaki)

OKINAWA, Okinawa Prefecture--One day in April, a fruit-and-vegetable man spoke to a shopper in broken English at a farmer’s market here because he assumed she was a foreigner.

When Malia Higa replied, “Masagisanu tomato yaibin yatai” (Your tomatoes look tasty), those around her looked a little surprised because an “American” spoke in the Okinawan dialect.

Higa, 53, was unconcerned. She was born in this southernmost prefecture during the Vietnam War to a father who served in the U.S. military and a mother who survived the 1945 Battle of Okinawa.

It took Higa decades before she was able to answer in this manner. One question long haunted her: “Who am I?”

Higa was named Rie to sound like Lee, her father’s name. But she was told that her father refused to accept that her mother would give birth to her and returned to the United States.

Higa was the target of bullying from early girlhood. She didn’t like her brown eyes, brown hair and prominent nose. She agonized over her looks and resented her parents.

A reconciliation finally allowed her to establish and accept an identity for herself.

Higa always felt depressed ahead of the June 23 Okinawa Memorial Day, when locals pray for the repose of those killed in the Battle of Okinawa.

Photos of U.S. service members holding flamethrowers were used as teaching aids during peace education classes at her elementary school.

Classmates threw stones at her, saying, “Go home to a military base, you American!” Bullies also damaged her school satchel, which was reduced to tatters.

She was not an American, and she was not allowed to enter a U.S. military base. But she was still not like the others.

When she was 17, Higa traveled alone to see her father at his address, which her mother had tracked down.

She wanted to know why her father refused to accept her and abandoned his family to go back home. She wanted to ask him if he had ever thought about her mother and about herself.

Her father agreed to see his daughter, who had come all the way to the United States to visit him. But he dodged her questions, which she asked in awkward English.

Higa received a letter from her father about a week after she returned home. He wrote that he wanted to take care of his family in the United States and did not want to have any contact with her in the future.

“There it is again,” she thought at the time. “I have been discarded.”

Higa married an Okinawan man when she was 19, but her husband’s relatives showed aversion to her being the daughter of an American father. She later divorced him and changed her name to Malia to rub the traces of her father out of herself.

The rape of an elementary schoolgirl by three U.S. servicemen in 1995 caused an uproar in Okinawa Prefecture. Higa was refused entry to one of her regular restaurants.

Higa made up her mind to leave Okinawa Prefecture. She found a job at a plant in Shizuoka Prefecture and left the island.

She was 30, and she was in mainland Japan for the first time.

Everything there appeared new and refreshing to her. There was a cold winter, and cherry trees of the Somei-Yoshino strain bloomed in spring. There was no harsh roar of U.S. military aircraft overhead.

Higa still faced some curious eyes because of her looks, but no one vented their sentiments toward her. She even sometimes forgot about the annual Okinawa Memorial Day.

Higa had been contacted by her father, who for some time had remained out of touch with her. He said he wanted to see her.

Higa’s oldest daughter, who was attending elementary school, was happy to hear the news about her grandfather.

Bewildered, Higa cautiously exchanged messages with her father. She was in the seventh year of her life in mainland Japan when she met him for the third time.

In looking back on the past, her father told her that he had thought it was probably not his own child and that he had returned to the United States along with his military unit.

He said that when he first saw the 17-year-old girl who looked like him, he realized she was his own daughter, but he could not accept that fact at once.

“You have always been my daughter,” Higa reported her father telling her. “You will always be.”

Higa felt her hatred flow out. The truth was that she wanted to be loved by her father. She was now able to admit honestly to that truth.

Before she knew it, she was able to embrace Okinawa and her roots more level-headedly. She returned to her native prefecture three years ago.

Hatred and confrontation continue to arise amid the suffering of Okinawa, which remains held down by the United States and Japan.

Higa has come to believe that the hatred once directed at her was probably the same thing as the suffering of Okinawa itself.

Once in Okinawa Prefecture, those of Higa’s children born in Shizuoka Prefecture were frightened by the roar of U.S. military aircraft and covered their ears with their hands.

That noise was part of her daily life. She realized that she had been forced to grow accustomed to something so outrageous.

Earlier this year, Higa joined a group lawsuit demanding compensation for noise pollution from a U.S. military base in Okinawa Prefecture and an injunction to flights.

She now knows who she is.

“I am an American-Okinawan,” Higa said.

Denying a U.S. military base is not the same thing as denying herself, who wouldn’t have been born if it had not been for the bases.

Higa said she believes that she is ready to face up to the suffering of her prefecture under the yoke of the U.S. military bases.