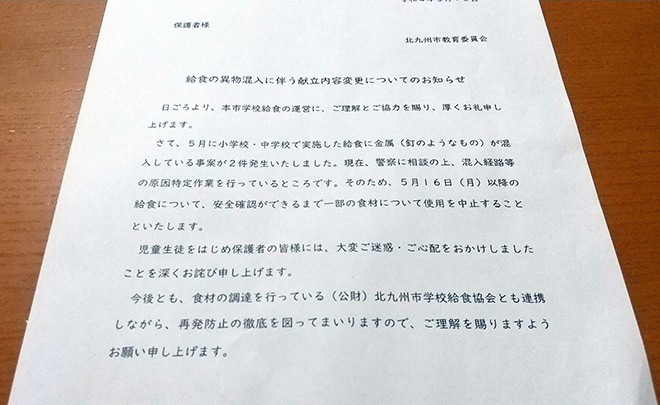 One of the documents distributed to parents from the Kita-Kyushu Board of Education in Kita-Kyushu, Fukuoka Prefecture, is seen on May 17. (Mayumi Jo)

KITA-KYUSHU--A metal fragment has been found mixed in a chikuwa fish sausage for a second time in a school lunch here only days after the first incident, the Kita-Kyushu Board of Education reported on May 17.

Even after a school reported the first case on May 11, the board of education said it let schools continue to use chikuwa in their lunch menus, saying, “If the chikuwa were chopped into small pieces, any foreign objects could be found during cooking.”

But a metal fragment was again discovered two days later at another school in the city.

“We couldn’t determine that chikuwa was to blame at that time," a board representative said of the first discovery. "As chikuwa was the main ingredient of the menu, we wanted to serve it as much as possible. We thought we could ensure safety by chopping it into very small pieces. But we very much regret continuing to serve it.”

The board of education said the metal fragments were 2 centimeters in length and 1 millimeter thick. No health problems were reported, and the schools have stopped serving chikuwa from the company it procured it from.

Yamabuki, which manufactured and delivered the sausage, is recalling the product.

On May 11, a student at Numa Junior High School in the city noticed a piece of metal in the fried chikuwa served with tea leaves.

After receiving the report, the board of education ordered schools in other districts in the city that were scheduled to serve the same item to chop it into 1-cm pieces and not to use wheat flour or tea leaves.

However, two days later, a student at Nakao Elementary School in the same city found another metal fragment in chikuwa.

The school lunches served at both schools were under a “kamikami" menu, which is served once a month to encourage students to properly chew their food.

Yamabuki said some parts of the machine used to make chikuwa were missing. The company said it has already begun recalling some products made with the machine.

The board of education received a report from the company on May 15 and has suspended the use of the company’s products in school lunches. The board said it will change the school lunch menus for the time being and will use food products from other companies from June.