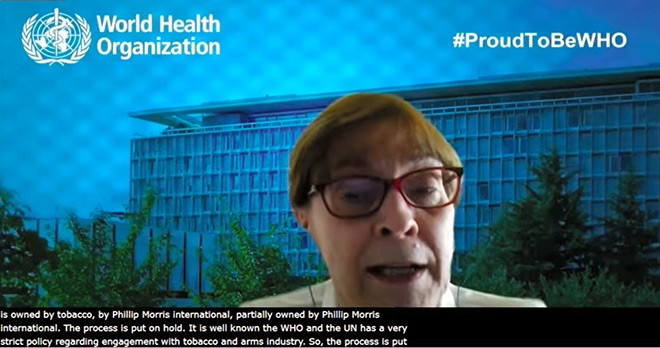 A WHO representative on March 16 indicates that the U.N. body would reject Medicago Inc.’s application for emergency use of its vaccine against COVID-19, citing its capital partnership with a tobacco company. (From video of a WHO news conference)

The World Health Organization’s rejection of a new COVID-19 vaccine because of a connection to a tobacco company was criticized in Japan among companies related to the development of the drug.

Medicago Inc., a Canadian pharmaceutical company, applied to have its Covifenz vaccine added to the WHO’s emergency use listing procedure (EUL) for COVID-19 vaccines.

The remainder is held by Philip Morris International Inc. And that was a problem for the WHO, which has taken a strong stance against smoking and tobacco companies.

A WHO representative said at a news conference in March that the rejection of Covifenz stems from the stake held by the U.S.-based tobacco company.

An MTPC official said the WHO has not officially notified the company about the decision on Covifenz.

“We believe the WHO’s refusal has nothing to do with the safety and effectiveness of our vaccine,” the official said.

But Philip Morris is livid about the WHO’s position.

“The mere suggestion of not approving a COVID-19 vaccine that could save lives is extremely regrettable because it runs counter to the WHO’s efforts to promote vaccinations around the world,” the Japanese arm of Philip Morris said in a statement.

The statement also said the WHO should focus on endeavors that advance medicine and innovations, not hamper access to medical products.

MTPC said the WHO’s decision will not influence the licensing procedure of Covifenz in Japan. The company plans to apply for the use of the vaccine in the country this summer.

Covifenz is different from the vaccines developed by Pfizer Inc. and Moderna Inc. because it is derived from a type of tobacco plant.

The vaccine uses “virus-like particles,” which mimic the structure of a virus. It was created by introducing genes of the novel coronavirus into leaf cells of Nicotiana genus plants.

The Canadian government authorized its use in February, the first in the world for a plant-based COVID-19 vaccine.

The final phase of a clinical trial in North America and elsewhere showed the vaccine proved 75.3 percent effective in preventing symptomatic infections from the Delta variant of the novel coronavirus. The figure for the Gamma variant was 88.6 percent.

Less than 10 percent of test subjects developed a fever of 38 degrees or more following two shots of the vaccine, and no serious side effects were observed.

The efficacy of Covifenz against the Omicron variant is currently being tested, MTPC officials said.

The vaccine can be kept in a refrigerator at temperatures of 2 to 8 degrees, making it easier to handle and reducing transportation costs, the officials added.

Being added to the WHO’s emergency use list would raise the chances for the vaccine to be administered worldwide.

Experts expressed surprise about the WHO’s position on Covifenz, given that it has scrambled to help ensure equitable distribution of vaccines around the globe and has encouraged inoculations since the pandemic hit in 2020.

Yoshiaki Yamagishi, an associate professor of medical innovation at Osaka University who is well versed in licensing procedures for medicine, said medical products should be evaluated, in principle, based on their scientific efficacy.

He also said the WHO should have provided detailed guidance about its pharmaceutical regulations if it views the involvement of a tobacco company as a strike against approval.

On the other hand, the Japan Society for Tobacco Control hailed the WHO’s decision as the “right one.”

“The WHO needs to reject the involvement of the tobacco industry in the production of pharmaceutical products, even if they are made to respond to the coronavirus pandemic,” said Manabu Sakuta, head of the society and a doctor specializing in neurology.

He said a tobacco company invests in a drugmaker to improve its image by contributing to public health, in addition to diversifying its revenue sources.

The WHO has taken a firm stance that cigarettes are a product that causes health hazards.

The WHO Framework Convention on Tobacco Control was adopted in 2003, with more than 180 signatory countries, including Japan. The treaty includes clauses that could restrict tobacco companies’ businesses and sales.

In 2000, when debates were raging over the treaty, the WHO issued a report of more than 200 pages that denounced the tobacco industry for trying to derail regulation efforts. The report named Philip Morris and Japan Tobacco Inc.

Parties to the WHO convention adopted a statement in a meeting in November, saying global tobacco control measures should not be eased amid the COVID-19 pandemic. The statement noted that the “tobacco endemic” kills 8 million people each year.

In an email interview with The Asahi Shimbun, a representative of the WHO, defended its policy.

“The expression of interest from Medicago for the EUL of the Covifenz vaccine has so far not been accepted because of the linkage with the tobacco industry and the WHO’s strict policy against engaging with companies that promote tobacco,” the representative said.

“Medicago was informed of this decision and has been apprised of the WHO’s policies on tobacco.”

(This article was written by Takahiro Takenouchi and Kanako Tanaka.)