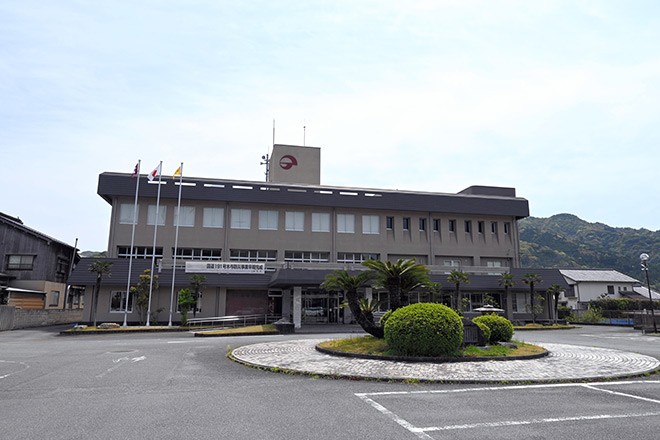 The town of Abu's municipal office, where an official accidentally sent 46.3 million yen to one resident (Michiya Ofuji)

ABU, Yamaguchi Prefecture--Prefectural police arrested a 24-year-old man who refused to return a staggering sum of money his town mistakenly sent him before he moved it out of his account and said he gambled it away.

Police said Sho Taguchi, an unemployed man who resides in the Fukudashimo district in the town of Abu, was arrested on May 18 on suspicion of committing computer fraud. Police said he has admitted to the charge.

According to police, Taguchi is suspected of transferring 4 million yen from the funds to an online payment service company using his smartphone, despite knowing the town had sent the money into his account through a banking error.

According to the town of Abu, Taguchi at first indicated that he intended to pay back the money when the town contacted him and explained what had occurred on April 8, immediately after officials realized the funds were mistakenly remitted to him on that same day.

But then, when town officials took him to a bank to have him return the funds, he refused.

“All the funds have been transferred to other accounts. I cannot return the money back to the original account,” he told town officials on April 21. “I will make amends for my crime.”

Officials filed a lawsuit with the Hagi Branch of the Yamaguchi District Court demanding that Taguchi return the full amount, plus legal fees.

Then, his lawyer revealed that Taguchi had told him he had gambled all the money away on overseas casino sites.

His bank account records show that money was transferred from the account on 34 occasions over an 11-day period, starting on April 8.

The most he had transferred on one occasion over that period was 4 million yen.