Japan calls on China to act responsibly to promote peace 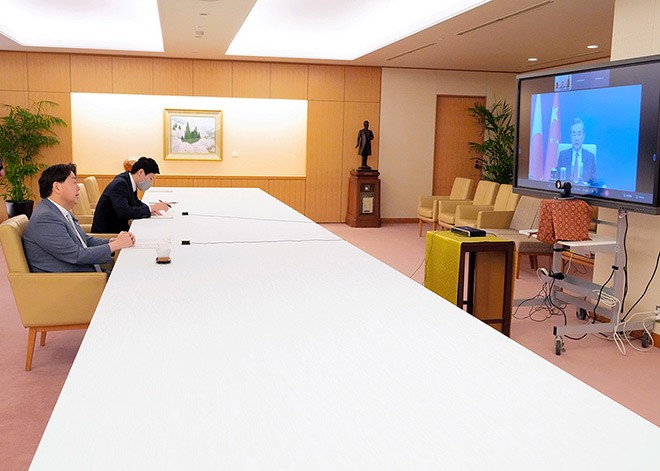 Foreign Minister Yoshimasa Hayashi, left, during a video conference with his Chinese counterpart, Wang Yi, on May 18 (Provided by the Foreign Ministry)

Foreign Minister Yoshimasa Hayashi urged China to play a responsible role in sustaining peace and security around the world, noting that Beijing has yet to condemn Russia’s invasion of Ukraine.

Hayashi made the call during a video conference with his Chinese counterpart, Wang Yi, on May 18.

The Japanese foreign minister labeled Russia’s aggression a “clear violation of the Charter of the United Nations and international law,” according to the Foreign Ministry.

Earlier this month, foreign ministers of the Group of Seven nations adopted a joint statement that effectively issued a warning for Beijing concerning the conflict in Ukraine.

China has refused to denounce Russia for the invasion, which began in late February. It also abstained from voting on a U.N. General Assembly resolution in March that demanded Russia pull its forces out of Ukraine.

The video conference between Hayashi and Wang, the first since November, was held at Japan’s request.

“The two countries should hold more talks and advance their cooperation in areas where we can fulfill our responsibility to the international community,” Hayashi said.

Wang also affirmed the need for the neighbors to work toward building constructive and stable ties.

He also referred to the importance of maintaining peace and stability of the Taiwan Strait during the 70-minute meeting.

According to the Chinese Foreign Ministry, Wang mentioned developments ahead of the next Quad Leaders’ Summit in Tokyo on May 24.

Wang expressed concerns about the heightened calls for Japan and the United States to align to counter China, even before U.S. President Joe Biden visits Japan.

“The Japan-U.S. alliance should not undermine China’s sovereignty and security,” Wang said.

Both foreign ministers expressed a willingness to hold commemorative events this year to mark the 50th anniversary of normalized diplomatic relations.

(This article was written by Takashi Funakoshi in Beijing and Yujichi Nobira in Tokyo.)