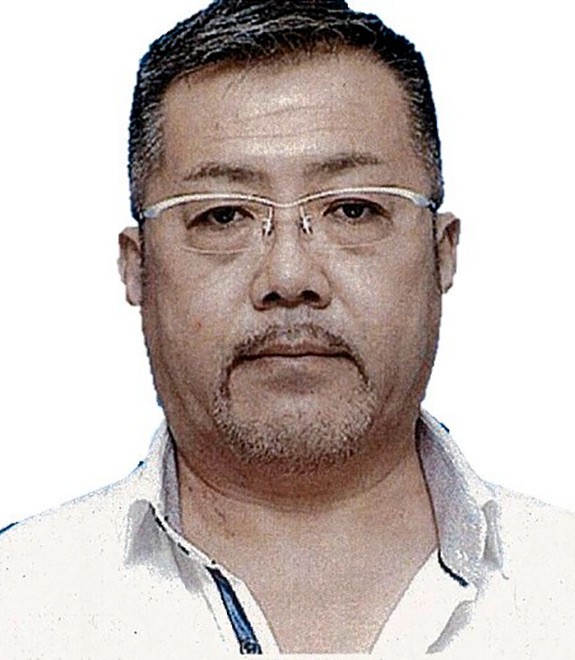 Hikaru Morikawa is suspected of defrauding romance-seeking men by pretending to be a woman. (Provided by Osaka prefectural police)

OSAKA--Prefectural police here said they have placed a “romance scam” ringleader on an international wanted list for posing as foreign women and duping apparently desperate men into sending him money.

Police on May 18 released a mug shot of the fraud suspect, Hikaru Morikawa, 58.

His address and occupation are unknown, but police said Morikawa’s fraud group is based in Ghana and he is likely hiding overseas. His details have been sent to Interpol.

According to the international investigation department of the prefectural police and the Sonezaki Police Station in Osaka city, Morikawa swindled a total of around 1.5 million yen ($11,661) from two men.

Morikawa pretended to be a female doctor with the United Nations and a female writer in the United States to win the affection of the men and persuade them to transfer money, police said.

Morikawa likely communicated with the two men through matchmaking apps, and they never saw his real face.

Investigators also said they sent papers to the Osaka District Public Prosecutors Office against two others who conspired with Morikawa to defraud a woman living in Tokyo of about 340,000 yen.

The two suspects are a waterproofing worker, 52, in Yokohama, and the leader of a yakuza gang affiliated with the Sumiyoshi-kai crime syndicate in Tokyo’s Shinjuku Ward.

The gang leader, who died in February at the age of 56, likely played a role in laundering money obtained in the scams in Japan, police said.

So far, police have arrested 13 suspected members of the international romance scam group and sent their cases to prosecutors.

They are believed to have defrauded 30 people, causing several hundred million yen in total damages.

The swindled money is believed to have been sent to Ghana, police said.