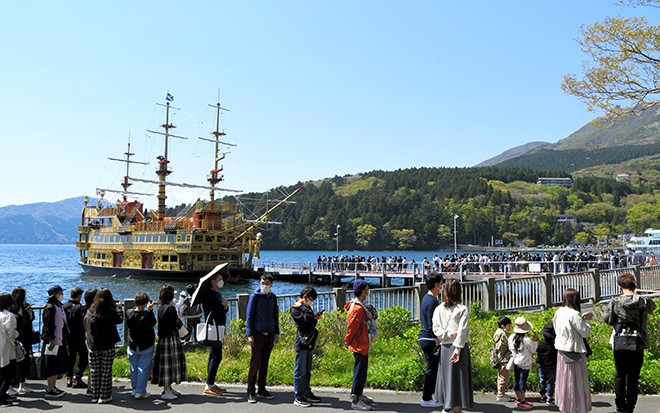 Visitors wait in line to board a sightseeing vessel in Lake Ashinoko in Hakone, Kanagawa Prefecture, on May 4. (Go Takahashi)

But companies are far from ready to celebrate a possible economic recovery from the COVID-19 pandemic. In fact, many say the health crisis has changed consumer behavior patterns that could have a permanent effect on their earnings.

Adding to the cautious stance of companies, a government report on May 18 said the nation’s economy contracted at an annualized rate of 1 percent for the first quarter of 2022.

On the surface at least, Japan appears to be emerging from the economic doldrums caused by the novel coronavirus.

Infection numbers have stabilized. COVID-19 restrictions are being eased. And the recent Golden Week holidays were held with no domestic travel limits imposed for the first time since the pandemic struck in early 2020.

All Nippon Airways Co. and Japan Airlines Co. said the number of passengers on their international flights from April 29 to May 8 was four to five times the level for the same period a year earlier.

And although the latest figure was just 20 to 30 percent of the level logged in the pre-pandemic year of 2019, signs are clear that Japanese are itching to travel abroad.

Leading travel agencies have resumed offering group tours to Hawaii for the first time in about two years.

ANA now offers three flights a week to Hawaii from Haneda Airport in Tokyo. The carrier plans to raise the number to seven, including those from Narita Airport, from July.

During the Golden Week holidays from late April to early May, visitors stood in a long line near Lake Ashinoko to board a sightseeing vessel in Hakone, Kanagawa Prefecture, a tourist mecca just outside Tokyo.

“This was the busiest Golden Week holidays since the pandemic hit,” said an official of Hakone Tozan Railway Co., which operates cable cars and ropeways in Hakone and the surrounding area.

Signs are also encouraging in the restaurant industry.

“Customers are gradually coming back,” Akio Sugihara, president of Gurunavi Inc., said at a news conference on May 11 to announce the company’s financial results.

The company operates the Gurunavi website for bookings at restaurants.

In April, the number of online reservations returned to almost the same level as for April 2019, according to Gurunavi.

But most of these reservations were made by small groups, not by large parties attending company events and other occasions, according to an official in the restaurant industry.

A true rebound for the economy will require consumers to spend more after saving money and refraining from going out became more common in the work-from-home environment.

Bars and restaurants that were often used as venues for “second parties” before the pandemic are not seeing a return of customers.

“We have a sense of alarm because we are afraid that customers’ mindset and habits have changed during the pandemic,” said Miki Watanabe, president of Watami Co., which operates a chain of “izakaya” Japanese-style pubs. “Unlike before, they are not visiting pubs after their work.”

“We used to see a certain number of customers showing up after 9 p.m. and 10 p.m.,” he said. “But few are now eating out in the late hours.”

The yen’s steep depreciation against the dollar since the beginning of this year has led to record net profits for fiscal 2021 among many major Japanese companies, including manufacturers that export their products.

But overall, businesses have been reluctant to give their employees pay raises, which are essential for increasing consumer spending.

Many companies do not want to take a chance on raising wages while the economic outlook remains murky and prices for materials and fuel are expected to continue rising in light of the Russia-Ukraine conflict.

Companies are also reluctant to bolster investment in plants and equipment, which represents about 16 percent of the GDP.

(This article was written by Shinya Matsumoto, Go Takahashi and Hiroshi Yamashita.)