Universities in Japan continue trend of moving to urban areas 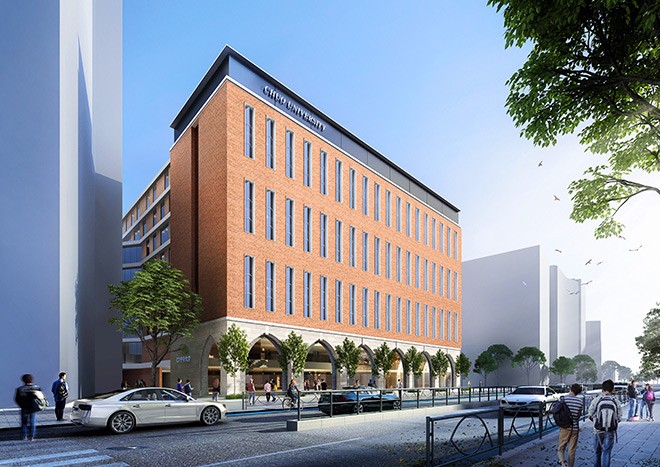 A building under construction just 10 minutes by subway from Tokyo Station and situated near Tokyo Metro’s Myogadani Station was seen one recent day covered with a blue tarp.

Chuo University expects to open its new campus there in April next year. Some 5,800 students of the faculty of law within the Tama campus, located 30 kilometers away in Hachioji, western Tokyo, will move to the new site.

“I'm happy I'll be able to drop by various places on my way from, and to, the campus,” said an 18-year-old student of the law faculty.

It takes one hour by train to reach Tokyo Station from the Tama campus, where the law student currently attends classes. The student said the location would be too far if she wanted to seek a job in central Tokyo while studying at the campus.

An increasing number of college operators are relocating campuses to urban zones in the hopes their improved accessibility will help lure more applicants and bolster cooperation with outside parties, creating higher-quality programs.

An expert noted the trend comes as universities are competing to win over students in their fight for survival amid Japan's fallen birthrate.

Chuo University relocated its departments involving social sciences and humanities in 1978 from Chiyoda Ward in the central part of the capital to the western Tama region to secure a wider area for studying.

About 80 percent of its students currently use the Tama campus.

The university operator opened its law school in Shinjuku Ward in central Tokyo in 2004. Other facilities, including a new department installed nearby in 2019, have been established in the urban zone as well.

The envisioned relocation of the law faculty reportedly means the ratio of students taking classes in central Tokyo will rise to 45 percent.

Nobuyuki Sato, vice president of Chuo University, stressed the significance of the transfer, stating the new campus will “boost coordination” within the law school and the science and engineering faculty located one station away.

Chuo University invites its alumni working as law experts and civil servants to offer lectures and seminars for students, and the relocation is expected to make it far easier to have those working in central Tokyo engage in such projects.

The school also believes the new easier-to-access campus in the urban area will lead to more prospective students.

Though an official responsible for entrance exams at Chuo University said no increase in applicants were seen this fiscal year due to “insufficient publicity efforts,” the college predicts the number will rise in the next fiscal year.

More high school teachers in charge of students’ post-graduation careers are positively responding to the planned campus’ prime location, according to the representative’s accounts.

Tokyo University of Science is to relocate its pharmaceutical sciences faculty from its campus in Noda, Chiba Prefecture, to Tokyo’s Katsushika Ward in April 2025.

Schools outside the greater Tokyo metropolitan area are also hopping on the urban bandwagon.

Hiroshima University will locate its law school in central Hiroshima in fiscal 2023, although it now sits 20 km away inside a campus in Higashi-Hiroshima.

Around the same time, Tohoku Gakuin University in Miyagi Prefecture is projected to integrate three campuses in Sendai and neighboring Tagajo into one in the central area of Sendai.

BACK TO THE CAPITAL

Universities in the metropolitan region around the capital have been moving campuses to central Tokyo off and on since the 2000s.

The installation of new faculties was formerly restricted in the core part of Tokyo because of legislation introduced in 1959 in an attempt to stop the zone from becoming even more densely populated. However, the law was scrapped in 2002.

This resulted in Toyo University, Aoyama Gakuin University and other operators that formerly had campuses in suburban regions to relocate them back to central Tokyo.

Izawa said pulling in certain numbers of applicants on a continuous basis is essential to maintaining the quality of students.

“Schools are appealing to (excellent) students by bolstering the convenience in commuting,” he said.

Having campuses in urban districts makes at times for better educational courses as well, as schools in such areas can team with outside groups or organizations and get company employees with expertise to double as teachers, Izawa said.

The moves come as competition among universities to recruit students heats up.

Data from the education ministry shows the population of 18 year olds started declining after 1992, when 2.05 million people were 18. The age's population has since fallen to 1.14 million last year.

New university student numbers have not plummeted so far due to a growing percentage of individuals going to college, but the figure is seen to continue dropping from now on.

Fewer people than privately run colleges’ total student quota were enrolled in schools in that category last year for the first time.

“Some universities have already felt the heat of the fire,” Izawa said. “Depending on their financial vitality, we assume they will continue relocating from here on out.”

(This article was written by Chika Yamamoto and Yukihito Takahama.)