Brewery gets the jump with craft beer made from crickets 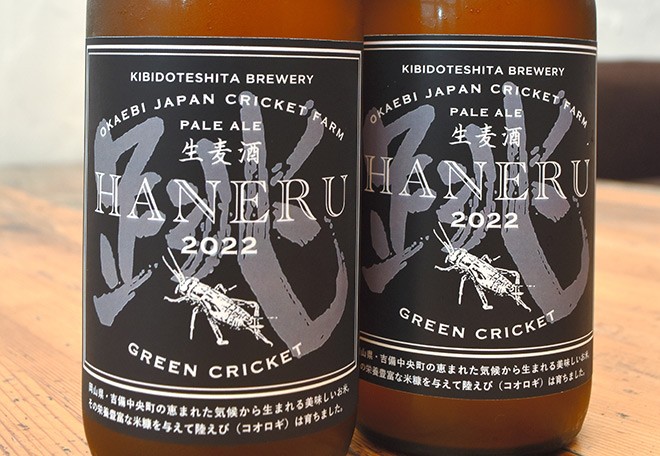 Bottles of “Haneru,” a beer made from cricket broth by Kibidoteshita Brewery in Okayama (Kunio Ozawa)

OKAYAMA--For purists, what a craft brewery here concocted must surely verge on sacrilege.

Kibidoteshita Brewery in the city’s Kita Ward already has a reputation for producing beer lineups made with distinctive ingredients, such as seasonal fruits, ginger and chamomile.

Perhaps it was just a matter of time before master brewer Koji Nishimura expanded his repertoire and set his eyes on insects, in this case, crickets.

After all, there is growing interest in “insect food” as a possible key to solving global food problems resulting from climate change.

Experts noted that insects can be raised with far less food, water and energy in comparison to domestic livestock, and their protein content compares favorably with meat.

In February, Nishimura and his staff boiled up two kilograms of live crickets raised with rice bran produced in the town of Kibichuo in Okayama Prefecture.

The broth from the crickets was then blended with sweet wort.

There was enough to make 200 liters of “cricket beer.”

“I had reservations because when I simmered the crickets, they gave off a fishy smell,” Nishimura confessed.

But the odor disappeared when the broth was mixed with sweet wort and aged. The result was a color and aroma just like beer.

In fact, the extract of crickets made the taste of the beer milder and richer in flavor.

Nishimura and his staff named the beer “Haneru,” which means “jump,” and produced 600 bottles.

It has been well received at events and other occasions, and not surprisingly, many beer fans are stunned to learn that crickets are the basic ingredient.

But it has sold fairly well, and the brewery is planning to produce a second lineup of cricket beer before summer.

Next time, dried crickets will be the main ingredient, Nishimura said, adding that he had never tasted an insect before he embarked on the project.

“I hope this beer opens the door for people to try insect food,” he said. “I now want to promote the notion that beer can be made from any ingredient.”