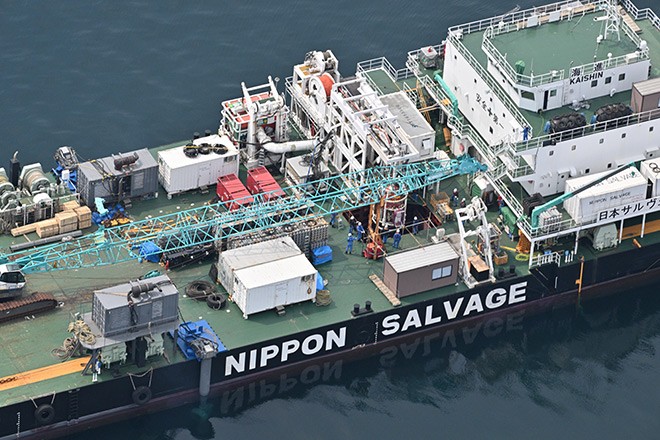 Work is under way on the working vessel Kaishin on May 19 to conduct a search inside the Kazu I tour boat, which sank off the Shiretoko Peninsula in Hokkaido. (Hiroyuki Yamamoto)

SHARI, Hokkaido--For the second day, divers searching inside the sunken Kazu I sightseeing boat on the seabed on May 20 failed to find a trace of 12 people who were aboard and remain missing.

The government intends to soon begin preparing for salvaging the Kazu I after analyzing the results of the deep-sea search operations.

The Japan Coast Guard commissioned a private-sector company to dispatch divers equipped with special saturation diving gear to investigate the interior of the tour boat.

The Kazu I sank in rough seas off the Shiretoko Peninsula, eastern Hokkaido, on April 23 with 26 passengers and crew aboard. So far, 14 bodies have been recovered.

Three divers began the search operations on May 19 but could not find any clues to the whereabouts of the missing people that day.

According to the Coast Guard, a capsule carrying the divers started descending from a working vessel to a depth of about 120 meters around 7:15 a.m. on May 20 to resume the probe.

The divers searched both inside and outside the boat from around 8:10 a.m. through 11:50 a.m. but again failed to find any signs of the missing people.