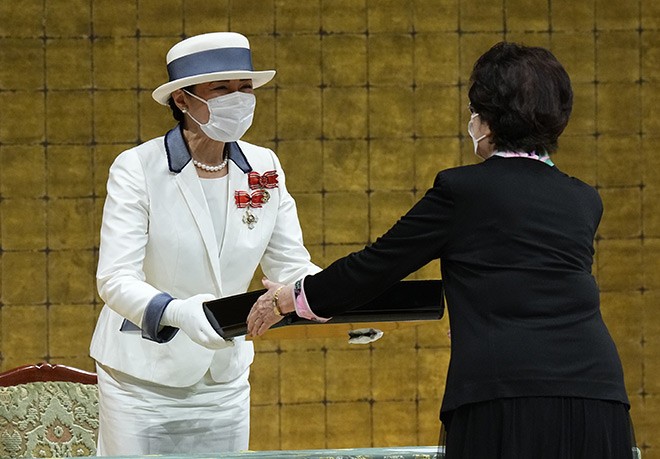 Empress Masako, left, gives a medal of merit at the Japanese Red Cross Society’s national convention on May 19. (Pool)

Empress Masako attended the Japanese Red Cross Society’s national convention in Tokyo on May 19 for the first time in three years.

This was the empress's first solo official duty outside of the Imperial Palace since the 47th Florence Nightingale Medal awards ceremony in August 2019.

The annual convention of the Japanese Red Cross Society had been canceled in 2020 and 2021 due to the COVID-19 pandemic.

The empress, who serves as its honorary president, gave medals of merit to 10 individuals and representatives of three organizations for their continuous support and volunteer activities for the JRC.

She also listened to a report from the director of the Japanese Red Cross Musashino Hospital with Crown Princess Kiko and other participants. The hospital has accepted many patients infected with the novel coronavirus.

“I am certain you have gone through many difficulties,” Masako told the director of the hospital after the convention.

This is the second time the empress has attended the convention since taking over as the honorary president from Empress Emerita Michiko.

Including Kiko, three princesses who are honorary vice presidents of the society also attended the assembly held at the Meiji Jingu Kaikan in Tokyo’s Shibuya Ward.

The annual convention brings JRC members from all over the country and representatives of its volunteers together. The event was scaled back, however, to prevent the spread of the novel coronavirus, with about 600 people participating.

The emperor and empress took a video tour of the JRC Medical Center in November 2020 in Tokyo’s Shibuya Ward and Red Cross hospitals in Hokkaido, Fukushima and Okinawa prefectures. They expressed their gratitude to the doctors and nurses working at the sites.