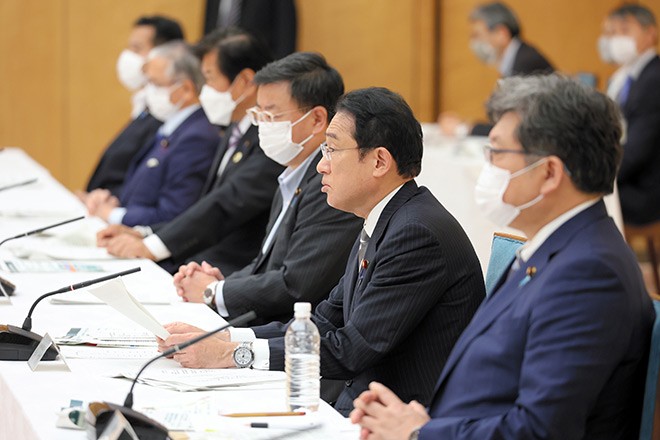 Prime Minister Fumio Kishida is vowing that his government will contribute 20 trillion yen ($156 billion) over the next decade to spur companies to invest in green energy and work toward a net-zero carbon emissions future by 2050.

He said the government is considering financing the move through issuing new “green” bonds, a move intended to encourage the private sector to fund projects that would help society decarbonize.

Kishida made the announcement at a May 19 meeting of experts discussing the government’s green energy strategy, where he said he wants to see overall investments from both the public and private sector reach 150 trillion yen over the next 10 years.

Kishida said the government is mulling introducing the new green bonds as its contribution to investments toward decarbonization and expressed hope it will prompt companies to commit to large, long-term capital investments.

Kishida also raised the prospect of introducing carbon pricing, which would tax or charge fees to carbon dioxide emitters, to provide a revenue source for future green projects.

A new panel will be set up within the prime minister’s office this summer to hammer out the details for the government’s green transformation program.

Under the proposed plan, the new government bonds would provide subsidies to companies considering investing in areas where the prospect of future profits is unclear.

Some of the potential game-changer projects envisioned include creating a supply network for hydrogen and ammonia that do not emit carbon dioxide when burned, developing storage batteries that could further spread the use of renewable energy sources, helping the transition to electric vehicles and developing technology to capture and store carbon dioxide.

The green energy strategy makes up one of the pillars of Kishida’s plan to create what he calls a “new capitalism.”