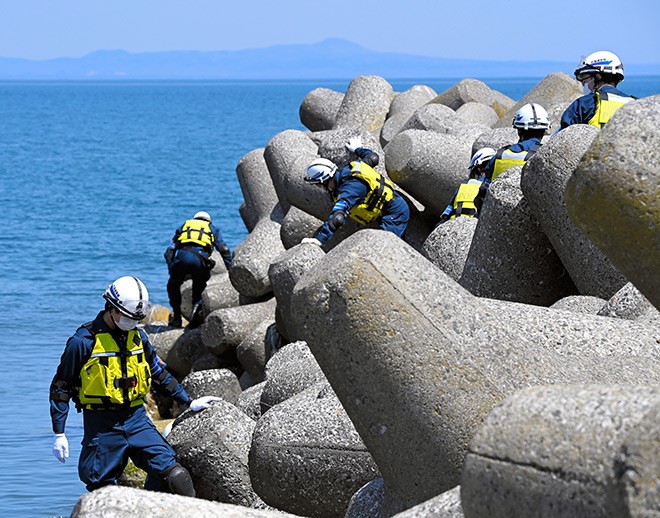 Police officers search for missing passengers of the Kazu I tour boat along the Shiretoko Peninsula in Hokkaido on May 16. Seen in the background is Kunashiri island, part of the disputed Northern Territories. (Kengo Hiyoshi)

Russia reported that another human body had been found washed ashore on Kunashiri island, part of the disputed Northern Territories, Japan Coast Guard officials said on May 20.

The Coast Guard is trying to gather information on the identity of the person, who was likely one of the passengers of the sunken Kazu I tour boat.

The Kazu I sank in rough seas off the Shiretoko Peninsula, eastern Hokkaido, on April 23 with 26 passengers and crew aboard. Fourteen bodies have been recovered while 12 people remain missing.

Russian officials on May 19 notified the Japanese consulate general in Yuzhno-Sakhalinsk, the provincial capital of Sakhalin, of the discovery of the body, according to the First Regional Coast Guard Headquarters, based in Otaru, Hokkaido.

The Coast Guard received the report from the Japanese Foreign Ministry.

The body was believed to have been found on the coast of the western part of Kunashiri island, which lies to the east of the Shiretoko Peninsula, according to Coast Guard officials.

But they said they have obtained no further information, including the age or the gender of the person.

Russia previously reported on May 10 that the body of a woman had been found washed ashore on the western coast of Kunashiri island on May 6.

The Coast Guard is working to identify the woman, who was also likely aboard the Kazu I.

The Northern Territories are islands off the coast of Hokkaido, seized by the Soviet Union at the end of World War II and claimed by Tokyo.