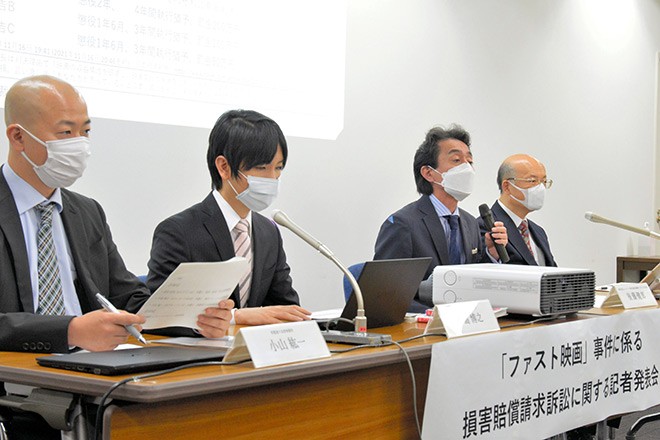 Major film companies on May 19 filed a damages suit at the Tokyo District Court against three people who posted unauthorized condensed versions of movies, called “fasuto eiga” (fast movies), on the internet.

It is the first civil lawsuit against fast movies, the plaintiffs' attorneys said.

Three people conspired to edit five movies into a 10-minute version without permission from copyright holders from around June 6 to July 21, 2020, according to a finalized ruling by the Sendai District Court.

The three added narration in the video explaining the film's synopsis, then uploaded them to YouTube.

“In a society where anybody can spread information, it is important for each and every person to think about the limits of what is permissible and what is a virus,” said Kensaku Fukui, a lawyer who specializes in copyright issues.

The three were found guilty and given a suspended sentence in 2021.

It was the first case in which fast movie uploaders were held criminally responsible.

The three had operated four channels and posted 49 fast movies, in addition to the five. The videos were viewed more than 10 million times, in total, according to court documents and lawyers.

The plaintiffs calculated the amount of damage from each playing of these videos at 200 yen, based on the Copyright Law.

They said the damages would then total about 2 billion yen.

Fukui said making and posting fast movies “poses a high risk for defendants because anyone can casually access the videos, and they are replayed millions of times, which will raise the compensation amount.”

However, the plaintiffs “are seeking a minimum recovery of damages” and have set the claim at 500 million yen, they said.

(This article was written by Takuji Hosomi and Atsushi Ohara.)