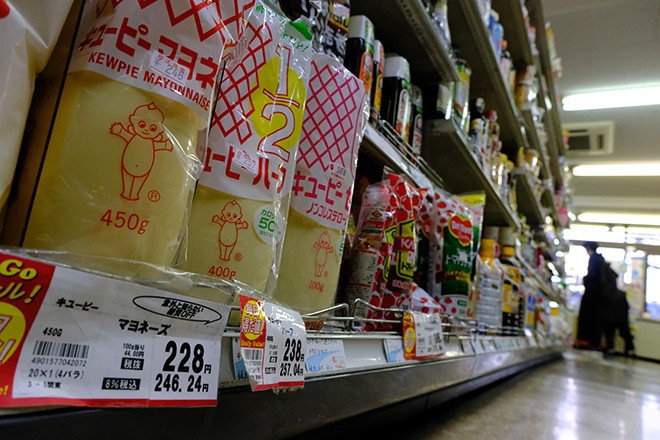 Mayonnaise sells at prices not seen in decades. (Taku Hosokawa)

The consumer price index jumped by 2.1 percent in April, the eighth straight month of increase and the largest surge in 14 years, the internal affairs ministry said May 20.

Excluding periods when the consumption tax rate was raised, the last time the CPI rose by more than 2 percent was in September 2008.

The cost of materials used in food products also shot up due to the weakening yen. Prices for food products excluding perishables increased by 2.6 percent year on year.

However, the effects from the discount fees dwindled in April and could not offset the price increases in other categories.

Experts predict the CPI will continue to rise in the near future.

The soaring cost of materials has forced some companies to repeatedly raise the prices of their products over the past year.

J-Oil Mills Inc., for example, has increased the price of its cooking oils five times since April 2021.

Materials became more expensive because of poor harvests and higher demand for their use in biofuels.

A further surge in costs was created after Russia invaded Ukraine in February. The weaker yen has also made imported materials much more expensive.

Food processing companies that use cooking oil in their products have, in turn, been forced to raise their product prices as well.

Kewpie Corp. has increased the price of its mayonnaise twice since July 2021. The tax-exclusive price for a 450-gram container is now 403 yen, the highest level over the past half century.

A similar pattern has emerged among flour producers and companies that use flour in their food products.

Nisshin Seifun Welna Inc. has twice raised the price of its flour since July 2021 and plans a third hike in July.

That has led Yamazaki Baking Co. to increase the price of its bread products in January, the first such hike in three and a half years.

Yamazaki Baking is planning another price increase in July.

Other companies that keep their prices at “one-coin levels” have been forced to abandon that policy.

However, the chain is again planning to raise the price above the 500-yen mark, to 530 yen.

Conveyor belt sushi chain Sushiro will do away with its 100 yen for a plate price that had been in place since it started operations in 1984.

Officials from various companies said price increases would likely continue because of uncertainties surrounding the situation in Ukraine as well as the yen.

(This article was compiled from reports by Keiichi Kitagawa and Yuji Yamashita.)