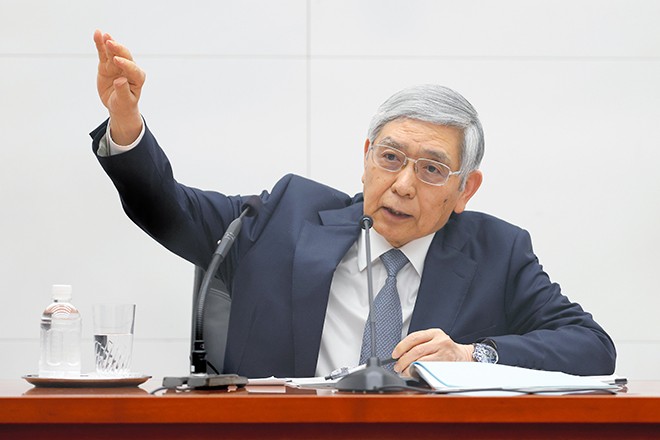 Bank of Japan Governor Haruhiko Kuroda speaks at a news conference in Tokyo on March 18. (Pool)

KOENIGSWINTER, Germany--Having long trod a similar path in tackling low inflation, Japan and Europe now appear to be taking contrasting approaches to monetary policy and the risks of rising prices, which drew warnings at this week's Group of Seven gathering in Germany.

Bank of Japan Governor Haruhiko Kuroda repeated his dovish mantra on Friday, saying the recent cost-push inflation will be short-lived and will not warrant withdrawing stimulus.

"There's absolutely no change to our view it's appropriate to maintain our yield curve control policy, including negative interest rates," Kuroda said after attending the G7 finance leaders' meeting.

Kuroda's tone contrasted with those of European officials who are becoming increasingly concerned about inflation, enough to pre-commit to rate hikes.

"It is for sure that negative interest rates are a thing of the past," European Central Bank policymaker Joachim Nagel said after the G7 meeting.

"The fact is that inflation dynamics have changed profoundly within a relatively short period of time. Accordingly, monetary policy has changed in most G7 countries."

German Finance Minister Christian Lindner, who chaired the G7 meeting, said central banks had a "great responsibility" to help get inflation under control.

Japan's core consumer inflation only slightly exceeded the BOJ's 2% target in April for the first time in seven years.

That pales in comparison to euro zone inflation that hit a record 7.4% in April, well above the ECB's 2% target even after stripping out an outsized increase in energy and food prices.

But Europe's case underscores the danger of being complacent about the risk of inflation broadening.

The ECB grossly underestimated inflation last year and played down concerns about mounting price-pressure for months.

ECB President Christine Lagarde all but ruled out rate hikes as recently as in December, before abruptly changing course and opening the door to the first bank's rate hike in over a decade.

The key to when Japan could finally join other economies in exiting extraordinary stimulus will depend on the outlook for inflation expectations - and the fate of the yen, analysts say.

The yen's recent slide to a two-decade low below 130 to the dollar has been a source of concern for Japanese policymakers, as it pushes up already rising import costs for fuel and food.

"The (BOJ) will raise the yield target at some point but it's hard to see that happening now," said Kit Juckes, a macro strategist at Societe Generale, pointing to Japan's weak economy and "incredibly well-anchored" inflation expectations.

"I'd have thought the Japanese authorities would like to keep the yen stable in a 120-130 range," he said, adding that the BOJ will have to normalise policy if the yen slumps to 140.