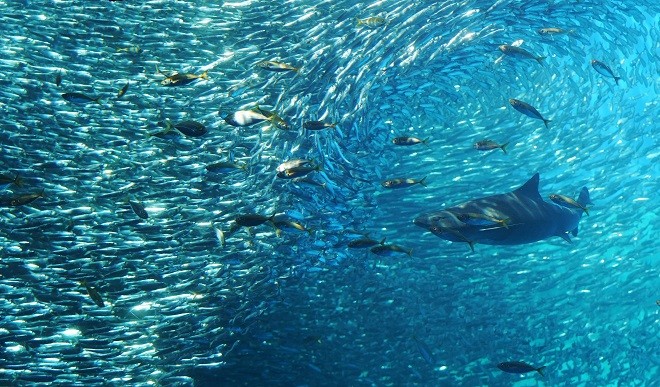 A shark swims through a school of silvery sardines at the Sendai Umino-Mori Aquarium in Sendai. (Toshiyuki Takeya)

For sheer spectacle, the sight of about 20,000 silvery sardines swimming freely in a large fish tank at the Sendai Umino-Mori Aquarium in Sendai’s Miyagino Ward is hard to beat.

Sardines are distributed along East Asian coastlines from Russia’s Sakhalin region to the South China Sea.

Adults are about 20 centimeters long.

Their bodies are bluish green on the upper side and silvery white from the side to the stomach, with a row of black dots.

The aquarium boasts the Sparkling of Life tank, which is 7.5 meters deep and 14 meters wide.

Recreating the sea of the Sanriku coast, the sun-drenched fish tank keeps around 30,000 specimens of 50 or so species for exhibition.

A school of sardines swims fast in the large tank, swirling and forming groups.

Sardines form masses of various shapes to evade sharks and rays charging at their prey. By swimming in a tightly packed formation, large predators have difficulty picking out individuals to eat.

“It’s their protection against predators,” said Yasuhide Saito, an attendant who is also in charge of planning at the aquarium.

Saito said sharks and rays are purposely kept in the same fish tank to mimic the natural environment in which sardines form groups.

However, the sharks and other fish are well fed and don’t bother the sardines unless they are weakened by stress or for other reasons. Then, they sometimes get eaten.

Yasuhide Saito, an attendant at the Sendai Umino-Mori Aquarium in Sendai, talks about sardines. (Video by Toshiyuki Takeya)