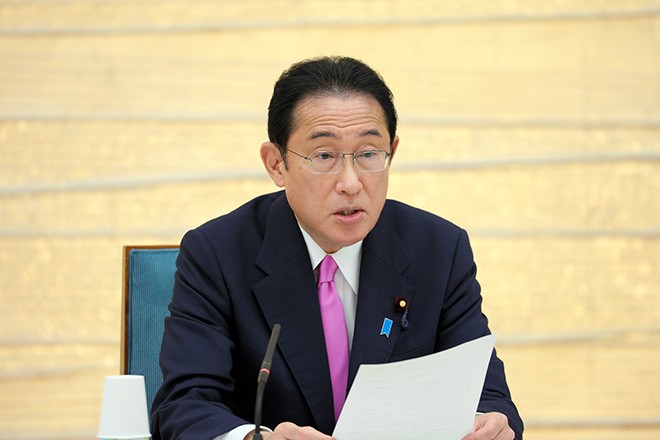 The rating is up from 55 percent in the previous survey conducted in April, while the disapproval rate slid from 29 percent to 26 percent.

One reason for the increased approval rating is the public’s high marks for the administration’s handling of the novel coronavirus pandemic.

Sixty-two percent, up from 53 percent, supported the administration’s measures, the highest ratio for the government since the pandemic struck in 2020.

Thirty-two percent did not support the Cabinet’s actions, down from 42 percent in the April poll.

The latest nationwide telephone survey of eligible voters, conducted on May 21-22, was filled with bad news for the opposition bloc.

Forty-two percent of respondents picked Kishida’s Liberal Democratic Party in the proportional representation segment of the Upper House election if it were held now, up 1 percentage point from the previous survey and a jump from 34 percent in the survey taken in February.

The LDP figure was also comfortably ahead of the ratio for any opposition party.

The Kishida Cabinet, formed in October last year, is increasingly attracting voters who are not LDP supporters, according to the survey.

For example, 43 percent of unaffiliated voters endorsed the Cabinet. And 40 to 50 percent of supporters of the opposition Nippon Ishin (Japan Innovation Party) and the main opposition Constitutional Democratic Party of Japan also gave positive marks to the Kishida administration.

The share of respondents who want the Upper House election in July to bring about a sweeping change in politics was 52 percent, compared with 44 percent who said they do not want to see much of a change.

In the poll in May 2019, just before the previous Upper House election, the figures were 47 percent seeking change and 43 percent satisfied with the status quo.

The latest survey showed that the majority of respondents seeking change do not think the current opposition bloc is capable of bringing that about.

Even 80 percent of voters backing the CDP said they did not think so.

By age, 69 percent of voters 70 and older gave the Cabinet a thumbs-up.

The survey also showed the LDP had a strong following among young voters. Fifty-six percent of voters from 18 to 29 years old said they would pick the LDP in the proportional representation segment if the election were held now.

Nippon Ishin remained the most popular opposition party, picked by 11 percent of respondents, followed by the CDP, at 10 percent.

The figures in the previous survey were 13 percent and 12 percent, respectively.

Nippon Ishin, which has a broad support base in Osaka Prefecture, overtook the CDP in that category for the first time in a survey held after the Lower House election in October.

Twenty-two percent of voters in their 30s picked Nippon Ishin in the latest survey, while 5 percent cited the CDP.

Among voters 70 or older, 8 percent chose Nippon Ishin and 14 percent picked the CDP.

One election strategy among the opposition parties has been to unite behind one candidate in single-seat districts.

However, 46 percent of survey respondents were against this strategy for the 32 single-seat districts in the Upper House election, while 42 percent were in favor of the idea.

Seventy percent of supporters of the CDP, the main promotor of the strategy, and 44 percent of unaffiliated voters approved fielding unified candidates.

The opposition force captured 11 of the 32 single-seat districts where they fielded unified candidates in the Upper House election in 2016, up from two seats in 2013, when there was no such coordination. In 2019, they cooperated and won 10 seats.

As for the COVID-19 pandemic, 55 percent of respondents were in favor of not wearing face masks outdoors if social distances are maintained, surpassing 42 percent who supported continued mask use outside.

The government’s new guidelines on mask wearing released on May 20 said people do not need to wear masks outdoors if they remain at least 2 meters apart from each other, and when they are not conversing, even within 2 meters.

Fifty-eight percent of men supported the relaxed mask-wearing policy while 38 percent opposed it. The corresponding figures for women were 51 percent in favor and 46 percent against.

Of the 1,134 landline phone numbers of randomly contacted households with at least one eligible voter, valid answers were given by 558, or 49 percent, for the survey.

As for the mobile phone numbers of eligible voters, 874 valid responses, or 41 percent, were received from 2,138 contacted.

The total number of valid responses was 1,432.