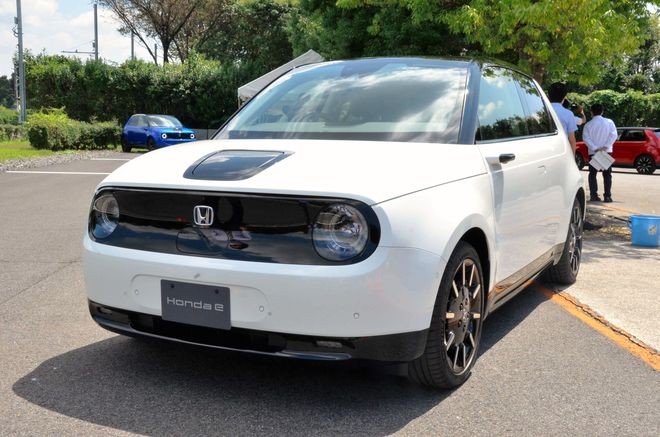 A “once-in-a-century” change in the auto industry has pushed Honda Motor Co. away from its proud “loner” image.

Other automakers have teamed up to slash production costs and share technology in the development of electric vehicles (EVs).

In March, Honda said it will set up a joint venture with Sony Group Corp. by year-end to create an EV for release in 2025.

The automaker also plans to share platforms for EVs with General Motors Co. in the United States.

“Various levels of cooperative efforts are significant in this age of EVs,” Shinji Aoyama, a senior managing executive officer in charge of electrification business at Honda, told The Asahi Shimbun.

One challenge facing automakers is to make their EV models stand out.

“If the entertainment feature of PlayStation is incorporated into automobiles, that will help expand our business potential,” Aoyama said. “That will likewise give our engineers great stimuli.”

According to Aoyama, it is difficult to differentiate its EVs for the general public from rival models.

One major reason is that many of the core parts of EVs, including batteries and motors, can be procured from outside suppliers.

“Unique engines can make a difference in gas-powered vehicles, but doing the same for EVs is difficult,” Aoyama said. “The question is whether we will be able to offer attractive services via digital technology.”

Perhaps the biggest challenge for automakers is reducing the production costs for EVs, which use expensive rare metals, such as lithium, in the batteries and motors.

Honda and GM will be sharing the vehicle platforms and jointly procuring components to cut production and development costs.

Through these joint efforts, Honda’s EV is expected to carry a price tag under 4 million yen ($31,400) in the U.S. market in 2027, before it is sold in Japan and other countries.,

Honda’s founder, Soichiro Honda, heavily promoted the independent development of technologies, enabling the automaker to remain self-reliant for many years.

Until March 2020, Honda R&D Co., an affiliate, was exclusively responsible for product development. It urged its engineers to come up with innovative and flexible ideas.

After the Muskie Act was introduced in the United States in the 1970s to tighten emission control regulations, Honda was the first automaker to meet the requirements with its compound vortex-controlled combustion (CVCC) engine.

“Although Honda has its own expertise to create EVs, companies outside the auto industry could enter the EV market, taking advantage of their novel ideas that go beyond those of long-established automakers,” a Honda executive said. “We need to break down our own internal barriers.”

Honda has set a global goal of selling only EVs and fuel cell vehicles by 2040. The target represents the most drastic switch among Japanese automakers to electric models.

The company plans to market an electric minivehicle for commercial use in 2024, followed by an electric passenger minicar and a sports utility electric vehicle.

Aoyama said the spread of EVs will largely depend on whether a sufficient number of charging stations are installed and when an all-solid-state battery will be put into practical application.

The next-generation battery technology is expected to be completed in the latter half of the 2020s.

“The stage for preparing a complete lineup of electric models will continue through 2030,” Aoyama said. “We will compete with other makers afterward by introducing automobiles unique to Honda.