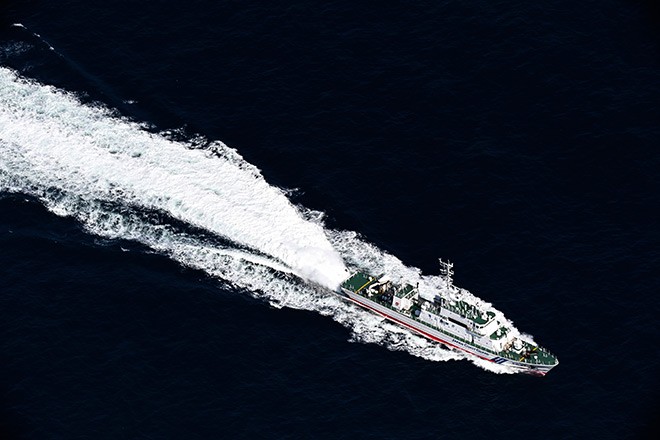 A Japan Coast Guard patrol boat takes part in the search and rescue operation of the Kazu I tour boat near Cape Shiretoko in Hokkaido on April 24. (Sayuri Ide)

The Japan Coast Guard will speed up its process for requesting help from the Self-Defense Forces in urgent search and rescue operations, according to sources.

This follows the fatal accident of the Kazu I tour boat, which sank off the Shiretoko Peninsula in Hokkaido on April 23 with 26 passengers and crew onboard.

The Coast Guard decided to beef up its rescue capabilities and procedures after it came to light that its operation to rescue the Kazu I was hampered by delays and that it took hours before the SDF was asked to intervene due to bureaucratic red tape.

The first distress call from the Kazu I was made at 1:13 p.m. on April 23, according to officials.

The Coast Guard instructed its patrol boats and helicopters to head to the accident scene at 1:22 p.m. that day. But the helicopter stationed at the Coast Guard’s Kushiro air station, which is responsible for the area where the tour boat sank, was already out patrolling when the accident happened.

It only managed to get to the scene of the accident at 4:30 p.m. that day, after returning from its patrol and refueling at the Kushiro air station. And it could not find the Kazu I.

The Coast Guard asked the SDF to dispatch personnel to provide disaster relief support at 5:25 p.m. that day, about four hours after receiving the original distress call, because a larger area needed to be searched.

It made the official request to the SDF to provide assistance even later, at 7:40 p.m. that day, some six hours after the accident, because some behind-the-scenes fine-tuning was needed.

Takahiro Okushima, the Japan Coast Guard commandant, said his organization only decided it would ask for the SDF help after it saw and understood what the accident scene was like by using a helicopter and other means of search--which is standard procedure.

He said that was why it took so long to request SDF assistance.

Three conditions typically need to be met for the Coast Guard to ask the SDF to dispatch support personnel: the accident would have to be of a “public nature,” help would be “urgently needed,” and the SDF would be the only organization that could assist.

But after the disastrous Kazu I accident, the Coast Guard decided that in a race against time where lives are at stake, it must quickly reach out to the SDF for help, even before the Coast Guard surveys the scene of the accident.

The Coast Guard has instructed its regional divisions in writing to ask for the SDF help sooner than they have in the past.

However, it is still in talks with the SDF on establishing new conditions for seeking SDF assistance.

Heads of the Regional Coast Guard Headquarters, as well as prefectural governors, have the power to ask the SDF to dispatch personnel to support disaster-relief operations.

Every year, more than 1,500 vessels are involved in marine accidents requiring search and rescue assistance.

The Coast Guard and the SDF are still searching for the missing people who were aboard the Kazu I more than one month after the accident.

So far, the bodies of 14 people have been found, while 12 people remain missing.

But the search has not been able to find any others since April 28.

The Coast Guard has been trying to identify two bodies Russia reported it had found washed up on Kunashiri island, part of the disputed Northern Territories.

The government completed the salvage operation of the Kazu I on May 23.

Authorities will then examine the boat in an effort to determine why the accident occurred.

The accident has cast a spotlight over inadequacies in the government’s ability to promptly and properly respond to marine accidents.

For example, it brought to light how laissez-faire the transport ministry was when it requested the Kazu I’s operator to improve its safety measures after its audit.

The Japan Coast Guard said it aims to improve its life-saving operations and address inadequacies within the government when it comes to ensuring safety to prevent a tragedy such as the Kazu I from occurring again.