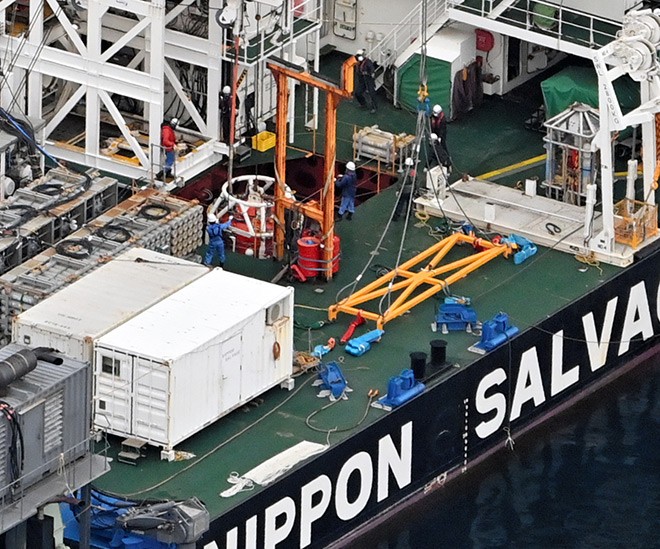 An underwater elevator to carry divers is seen on a salvage barge off the Shiretoko Peninsula in Hokkaido on May 23. (Kotaro Ebara)

The salvage operation of the sunken sightseeing boat Kazu I off the Shiretoko Peninsula in Hokkaido resumed on May 23, the one-month anniversary of the tragedy.

The Japan Coast Guard said the salvage team hoisted the boat from the seabed to 10-20 meters below the surface of the sea and then left the ocean area in the afternoon.

Private saturation divers hired by the Coast Guard started diving about 120 meters below the sea surface on the morning of May 23 and rigging up a belt around the boat’s frame to raise the vessel.

After divers return to the salvage barge, the team carefully lifted the boat using a hoisting machine so that it would not be damaged.

Initially, the team wanted to move the boat to shallow waters off Abashiri.

But because strong winds are expected, the team will be headed to the offing off Shari, and pull out the boat on the salvage barge on May 24.

To mark the one-month anniversary on May 23, two small sightseeing boats left Utoro Port and were headed to the area where the boat sank.

The boats appeared to be carrying family members and others associated with those aboard the Kazu I.

According to a passenger, the boats sailed to near the location where the boat sank and the passengers offered flowers and silent prayers.

Local small sightseeing boat operators have voluntarily suspended their operations since the accident and staff have joined the search and rescue efforts.

At around 10 a.m. on May 23, Shari town Mayor Takashi Baba, as well as vice land minister Norihiro Nakayama, visited the town’s gymnasium in Shari and offered flowers.

In a drizzling rain, the two entered the gymnasium.

“One month is not a closure," Baba said. "We are working hard on the search and rescue mission. I pray that those who have yet to be found will be located as soon as possible.”

Nakayama said, “I pledge that we will take preventive steps with unwavering resolve.”

The gymnasium became a temporary morgue after 11 bodies were found on April 24, a day after the sinking.

Family members of the passengers checked the recovered personal effects from the bodies and were reunited with their loved ones in the gymnasium.

So far, 14 people have been found, and all the bodies have been returned to their families before the temporary morgue was closed on May 2.

But people have still come to the gymnasium to offer flowers.

The town decided not to remove the stand set up at the gymnasium’s entrance for a floral tribute. Instead, it moved the display to inside the gymnasium.

According to the town, a total of 810 floral arrangements were offered by May 22.