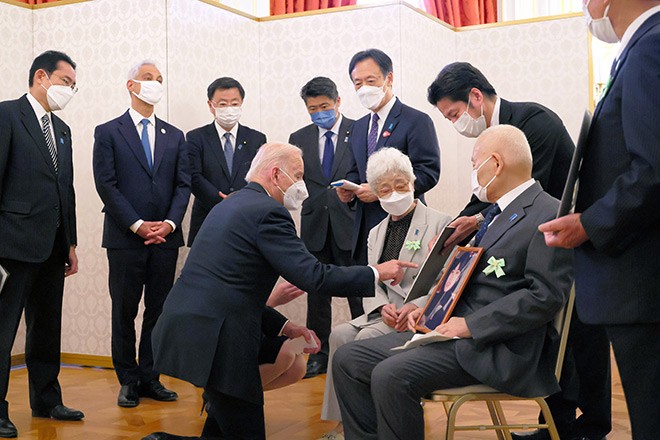 U.S. President Joe Biden kneels to talk to Sakie Yokota, mother of abductee Megumi, at the State Guest House in the Moto-Akasaka district of Tokyo’s Minato Ward on May 23. (Provided by Cabinet Public Relations Office)

The president met with the 11 relatives at the State Guest House in the Moto-Akasaka district of Tokyo’s Minato Ward on May 23 as part of his official trip to Japan.

The abductees’ family members said at a news conference that the meeting with Biden lasted for about 30 minutes.

“We were reassured that the United States will continue taking the abduction issue seriously,” Takuya Yokota, head of the association of abductees’ family members, said at the news conference. “North Korea’s biggest concern is the United States. The commitment shown by Japan and the United States to cooperate in resolving the issue has given us courage and strength.”

Yokota, 53, is a younger brother of Megumi Yokota, who was 13 years old when she was abducted to North Korea from Niigata Prefecture in 1977.

The brother and his mother, Sakie Yokota, 86, were among those who met Biden.

Koicihro Iizuka, 45, the eldest son of Yaeko Taguchi, who was 22 when she was snatched by North Korea, also met the U.S. president.

Biden spoke to and shook hands with each family member, deviating from the original plan that he would be greeted only by their representatives, including association leader Yokota.

When Takuya mentioned his mother’s age in his greeting remarks, Biden knelt down and talked to Sakie, who was sitting on a chair.

Biden told Sakie that he himself had lost a son. He then hugged her, saying he understood very well how she felt.
Sakie replied: “Children are parents’ treasures. Please join forces (to bring the abductees home).”

This was the fourth meeting between the abductees’ family members and a U.S. president, following ones with George W. Bush in 2006, Barack Obama in 2014 and Donald Trump in 2017.