Kishida: G-7 summit set to be held next year in Hiroshima 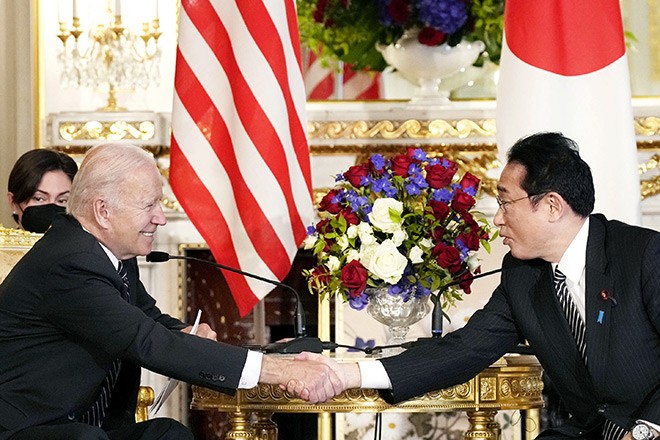 Prime Minister Fumio Kishida will get his wish, with the symbolic city of Hiroshima, his hometown, to host the Group of Seven summit next year.

“There is no location more suitable to demonstrating our commitment to peace than Hiroshima,” Kishida said at a May 23 joint news conference with visiting U.S. President Joe Biden.

Kishida represents a Lower House district that covers the central part of Hiroshima city, and he is also concerned about the veiled threat made by Russian President Vladimir Putin to use nuclear weapons should NATO intervene in the invasion of Ukraine.

“At next year’s G-7 summit, I want to display the will of the G-7 to resolutely reject armed invasion, threats using nuclear weapons and any attempt to upset the international order in a manner that will be remembered by history,” Kishida said.

Biden said, “I welcome the prime minister’s announcement that the G-7 summit will take place in his hometown of Hiroshima.”

At his news conference later on May 23, Chief Cabinet Secretary Hirokazu Matsuno said support for holding the G-7 summit in Hiroshima had been obtained from all members, including the nuclear powers of Britain and France.

Because he represents a district in Hiroshima, Kishida has long pushed for a world without nuclear weapons.

High-ranking officials in the prime minister’s office said the situation in Ukraine pushed Kishida to seek holding next year’s summit in Hiroshima.

“Considering the situation in Ukraine, there is huge significance in holding the summit in Hiroshima, which is a symbol of peace,” one official said.

Natsuo Yamaguchi, the head of the junior coalition partner, Komeito, had already suggested to Kishida that the summit be held in Hiroshima.

In preparing for Biden’s visit to Japan, officials discussed various issues with their U.S. counterparts and were increasingly confident the U.S. president would not object to a Hiroshima summit.

Other officials also contacted their counterparts in Britain and France to tell them about the possibility of holding the meeting in Hiroshima.

(Keishi Nishimura contributed to this article.)