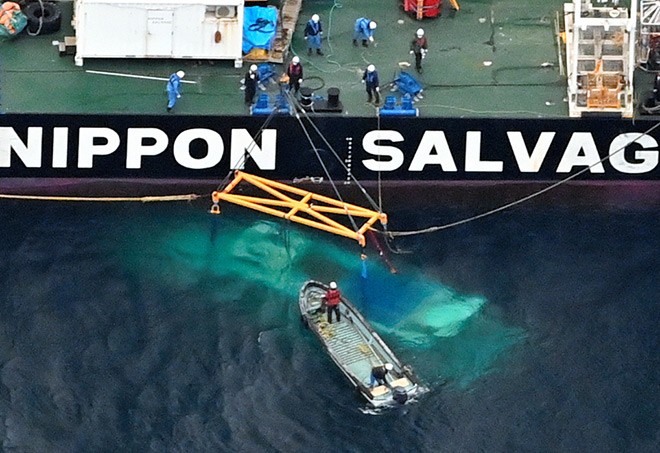 The sunken Kazu I tour boat is lifted close to the water’s surface off Shiretoko Peninsula in Hokkaido on May 23. (Kotaro Ebara)

Much to the shock of the family members of the missing passengers and crew members of the sunken tour boat Kazu I, an operation to salvage the vessel proved unsuccessful.

Over the course of about an hour, the operation team lifted the boat up to near the water’s surface from the sea bottom, about 120 meters deep, off Shiretoko Peninsula in Hokkaido on May 23.

Because the spot where the boat sank was too deep for the salvage barge to anchor, it had to move to a shallower area off Shari, with the boat still attached to it. Once there, it planned to haul it completely out of the water.

However, after the barge started to tow the wreck away, it decoupled and plunged even deeper, according to the Japan Coast Guard.

The tide in the area was strong and the boat apparently slipped out of the nylon belts holding it up. It is possible that the belts were severed, the Coast Guard said.

An unmanned underwater vehicle searched for the Kazu I and found it on the ocean floor at around 11:40 a.m., at a depth of about 180 meters. Its new location is about 11 kilometers west of Utoro Port in Shari. The closest shore is about 7 km away.

The boat appears not to have suffered serious damage in the drop, according to the Coast Guard, but officials have yet to fully confirm this.

The setback has sent the recovery team scurrying back to the drawing board, and it will now huddle over how to best proceed from here, officials said.

Meanwhile, the transport ministry on May 24 said it will revoke the license of the operator of the ill-fated sightseeing boat, which sank in late April with 26 passengers and crew members aboard. Fourteen bodies have been found and 12 people remain missing.

The ministry has confirmed that the company that operated the Kazu I, called Shiretoko Pleasure Boat, committed at least 17 violations of the Marine Transportation Law.

“Multitiered safety-net functions did not work because of the violations, leading to the accident and exacerbating the damage,” the ministry said.

The ministry will hold a hearing on June 14 and is expected to revoke the license by the end of June.

According to the ministry, Seiichi Katsurada, the president of the company and its designated operations supervisor, falsely reported to the ministry that he had three years or more of hands-on experience operating boats.

Katsurada, in fact, had little hands-on work experience, and he has admitted to ministry officials that he lied about having it, the ministry said.

Under the company’s safety management rules, an operations supervisor is generally required to be present in the office while its boats are operating.

But Katsurada, who became the company’s operations supervisor in March 2021, was frequently absent, according to sources.

The ministry conducted a special audit in late June 2021 into accidents the Kazu I had in May and June of that year.

At the time, Katsurada told auditors that he “comes to the office every day,” sources said.

But on April 23 this year, when the Kazu I sank, Katsurada was not in the office.

“It was rare for the president to come to the office,” said a man who worked as a boat captain at the company for nearly 10 years. “He was almost always absent.”