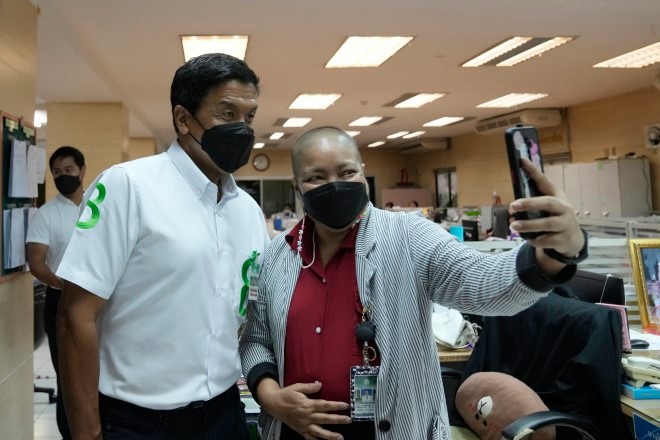 A supporter takes a selfie with Bangkok governor independent candidate Chadchart Sittipunt, left, during an election campaign in Bangkok, Thailand on May 17, 2022. (AP Photo)

BANGKOK--Residents of the Thai capital Bangkok, in their first opportunity in nine years to vote for their city’s governor, have elected an independent politician seen as representing opponents of the country’s military-backed government, results released Monday showed.

Chadchart Sittipunt had been widely predicted by opinion polls to top the field, but significantly outpaced expectations by taking 1,386,215 votes, or almost 52 percent of the 2,673,696 votes cast in Sunday’s election, according to virtually complete but uncertified returns.

He competed in a field of 31 candidates, with voter turnout just under 61 percent.

The 55-year-old Chadchart, though running as an independent, was seen by both supporters and opponents as a proxy for the Pheu Thai party, the main Opposition grouping in Parliament. He served as transport minister in a Pheu Thai government in 2012-2014, and stood as one of the party’s prime ministerial candidates in the 2019 general election.

“Now that we’ve received an order from the people, I would start working right away, visiting communities and areas to see where I could begin my work as soon as I can as a governor,” Chadchart told reporters Monday morning. “I have a young, energetic team who are keen to move.”

He spoke at Bangkok’s downtown Lumpini Park, where he came to resume his regular exercise routine of running, an activity that helped forge his public image as an accessible, can-do politician.

The independent candidate who was seen as a stand-in for the ruling Palang Pracharath party ran a weak fifth in the race. Former Bangkok governor Aswin Kwanmuang, a retired senior police officer, came in fifth with 214,692 votes, or about 8 percent of the votes cast.

The 71-year-old Asawin was appointed governor in 2016 by Prayuth Chan-ocha, who as army commander seized power in a 2014 coup and dismissed the previous governor over corruption allegations. Prayuth was returned to office as prime minister following the 2019 election in a coalition government led by the military-backed Palang Pracharath party.

Prayuth, who has been accused of fumbling the response to the coronavirus pandemic, is expected soon to face a no-confidence motion in Parliament, and rivals on his own side have long been rumored to be seeking to remove him. Even if he survives, there must be a general election by early next year.

Political science professor Thitinan Pongsudhirak of Bangkok’s Chulalongkorn University, noted ahead of the vote that this was the first significant election since the 2014 coup.

“People are hungry to have a say,” he said in an email to The Associated Press. “The result, if it clearly goes against ruling Palang Pracharath, would be consequential for Parliament, Prayuth and no-confidence.”

However, while the Bangkok election results are discouraging for Prayuth and the ruling party, they don’t constitute a death knell.

While there were ideological reasons influencing many voters, Chadchart is also one of the country’s most charismatic politicians, who ran a vigorous campaign compared to the relatively colorless bureaucrat Asawin.

More significantly, voters in Bangkok do not necessarily reflect nationwide trends in Thailand, whose electorate is largely rural. The ruling Palang Pracharath party was able to mobilize many rural voters in the 2019 election with the assistance of influential local and provincial political bosses.

Thai politics polarized sharply after a 2006 military coup ousted then-Prime Minister Thaksin Shinawatra, whose political party afterward evolved into Pheu Thai. Supporters of Thaksin, and his opponents--largely led by royalists and the military--have since been contending for power, sometimes violently.

Sunday was the anniversary of the 2014 coup that toppled the government in which Chadchart served, which was led by Thaksin’s sister Yingluck. He has spoken of how he was detained then: held for seven days at a military base with hands tied and a hood over his head.

“But I don’t feel angry, vengeful or hateful. It was something that had happened and you must forgive what had happened,” he told his supporters Sunday night as they celebrated the early results.

“But this is a memory to remind ourselves that when the public is divided, fighting and hating each other, there will be a group of people taking advantage of the situation,” Thaksin said. “We can have different opinions but we should not be angry and create hatred against each other.”