TASTE OF LIFE/ Sauteed scallops with cream sauce: Discover creative ways to cook with an exciting yet simple dish 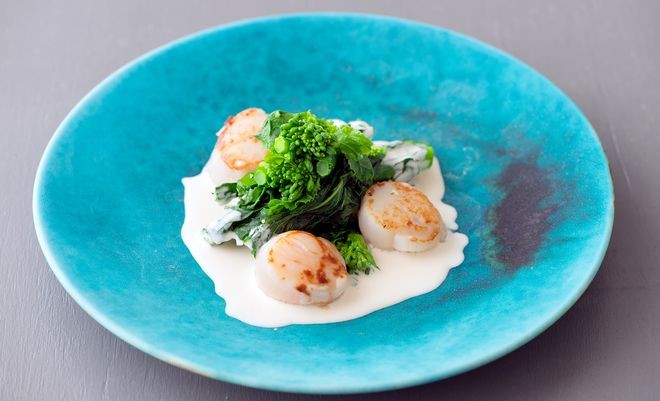 Naoya Higuchi, who has written novels such as “Otona Doroppu” (Adult drop) and “Kicchin Senso” (Kitchen wars), began his career in cooking.

Having worked as a chef at a restaurant and as a catering chef, he now writes online, in magazines and in books about cooking.

He developed an interest in cooking when he was in junior high school, sparked by a TV program that focused on Japanese chefs who visited restaurants overseas, including Italy and France, cooked dishes and asked people to try them.

A Japanese chef made sauteed scallops with cream sauce comprising white wine, scallions, fresh cream and a dash of oyster sauce. Looking back, Higuchi said the way the chefs on the show pursued their original dishes made “cooking look really creative.”

Higuchi promptly went to the supermarket to buy the ingredients and made sauteed scallops with cream sauce. The dish he made for the first time tasted so good, he became enchanted with cooking.

Young Higuchi studied using a book written by Shizuo Tsuji, an expert in French cuisine, which he found on his father’s bookshelf. He also watched cooking shows such as “Kyo no Ryori” (Today's meal) and “Ryori no Tetsujin" (Iron Chef).

“Just like music groups fascinating teenagers, cooking seemed cool to me at the time," he said. "Starting cooking is also less daunting to me than taking up a musical instrument, which takes time to master.”

His parents gave Higuchi free reign in the kitchen. He even took part in a workshop presented by Kiyomi Mikuni, chef of French cuisine, among adult attendees. He went on to study food science at an agricultural senior high school hoping to become a chef and then went to a cooking school before entering the culinary profession.

Scallops prepared to be eaten as fresh as sashimi were used for the recipe. To prevent overcooking, after cooking one side, cook the other side using the remaining heat.

Naoya Higuchi: Born in Tokyo in 1981, he is a writer-cum-chef. After graduating from Hattori Nutrition College, he worked as an assistant at cooking classes and as a catering chef of French cuisine before becoming a cooking expert. In 2005, he won the Gunzo Award for New Writers with his novel “Sayonara Amerika” (Goodbye, America) and debuted as a writer. Other than novels, he has published books on cooking such as “Boku no oishii wa 3 de tsukuru: Atarashii kondate no tebiki,” (My version of what tastes good comprises three elements: A guide to new menu planning), published by Tatsumi Publishing Co.

1. Boil green vegetables in hot water with salt and cool. Squeeze out water and cut into appropriate length.

2. Apply olive oil on one side of scallop and sprinkle salt. Warm frying pan on medium heat for 30 seconds and cook one side with oil first. When it has colored, turn over, turn off heat and wait for 1 minute before putting onto a plate.

3. Pour white wine and oyster sauce in a small pot and place on medium heat. When content is reduced to about a half, add fresh cream. When sauce has thickened, turn off the heat. The thickness is right if you can draw a line on the back of a spoon dipped in the sauce.

4. Serve green vegetables and scallops on a plate with sauce.

About 210 kcal and 0.8 gram salt per portion of roux
(Nutrient calculation by the Nutrition Clinic of Kagawa Nutrition University)

Use a non-stick frying pan to brown the scallops nicely. They color evenly by applying oil on the side with a finger instead of pouring oil in the pan.