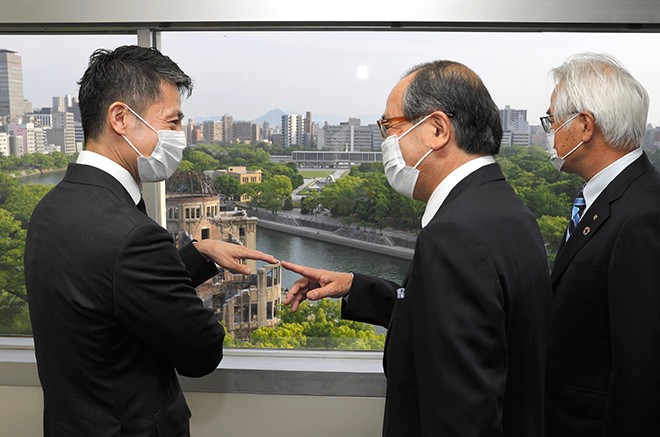 HIROSHIMA--Survivors of the atomic bombing in Hiroshima welcomed the news that next year’s Group of Seven summit would be held in their city.

However, they emphasized that a strong message rather than just a symbolic gesture needed to be sent.

“It would be wonderful if a message about eliminating nuclear weapons was transmitted from Hiroshima to the world,” said Kunihiko Sakuma, 77, leader of the Hiroshima Prefectural Confederation of A-bomb Sufferers Organization.

He added that leaders would not understand the true picture of what occurred on Aug. 6, 1945, unless they visited the Hiroshima Peace Memorial Museum and listened to the hibakusha who survived the atomic bombing.

“What will be important is what they get out of that and how they turn those feelings into action,” Sakuma said.

Russian President Vladimir Putin’s threat to use nuclear weapons if Western nations interfered in Russia’s invasion of Ukraine was on the mind of Tomoyuki Mimaki, 80, who heads the association of A- and H-bomb survivors in Hiroshima Prefecture.

“We have long called for never again allowing (a nuclear attack), but it has had little effect,” Mimaki said. “I want (the leaders) to send out a strong message from Hiroshima.”

Hiroshima Mayor Kazumi Matsui held a news conference on May 23 along with Hiroshima Governor Hidehiko Yuzaki following the announcement by Prime Minister Fumio Kishida that the G-7 summit was headed for the city.

“There is huge significance in having the leaders, including those of nuclear powers, gather here for discussions,” Matsui said. “I feel the international situation might improve a little if a message is transmitted from here.”

Hibakusha Shigeaki Mori, 85, became world famous when then U.S. President Barack Obama hugged him during a ceremony in the Hiroshima Peace Memorial Park in May 2016.

Mori said he hoped holding the G-7 summit in Hiroshima would serve as a major turning point in eliminating nuclear weapons from the world.

Noting Obama left office with little progress made toward a world without nuclear weapons and pointing to the Russian invasion of Ukraine, Mori added, “The visit to Hiroshima should not end up being only a publicity stunt.”

Haruko Moritaki, 83, a special adviser to the Hiroshima Alliance for Nuclear Weapons Abolition, recalls that her group wanted Obama to apologize for the United States dropping the atomic bomb on Hiroshima.

Officials of the Hiroshima prefectural and central and municipal governments made no such request to Washington, however, and their general mood was one of welcoming the first visit to Hiroshima by a sitting U.S. president.

Moritaki said Putin could make the outrageous threat of using nuclear weapons because of the history of an atomic bomb having been used.

She said she felt having the United States admit it was wrong for it to use an atomic bomb would be necessary to ensure nuclear weapons are never used again.