Hiraniwa Togyu Taikai, the only bullfighting event in the Tohoku region, opens its 40th season on May 15 in the Yamagatacho district of Kuji, Iwate Prefecture. (Hideyuki Miura) 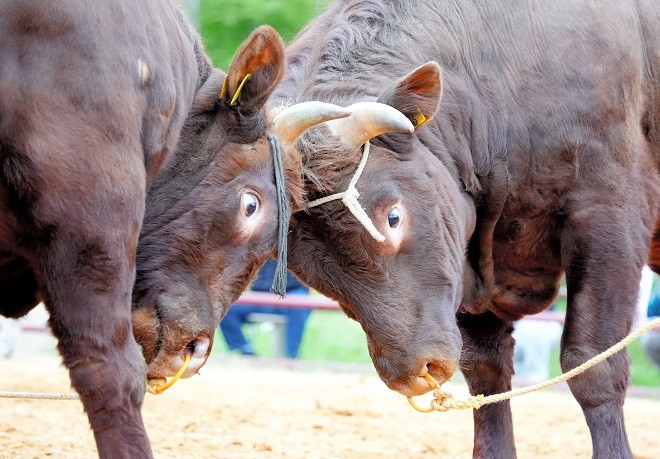 KUJI, Iwate Prefecture--Bulls weighing more than 600 kilograms each clash in the center of a ring to the applause of a boisterous crowd. The animals glare through red eyes as they lock horns and push with all their might.

But this is not considered a violent event.

In fact, there are no winners or losers in these battles.

The 40th season of the Hiraniwa Togyu Taikai event opened on May 15 in Kuji, Iwate Prefecture, featuring 16 bulls.

In each bout, the bulk of the two bulls colliding causes a heavy thumping sound and raises clouds of dust.

The goal, essentially, is to push the opponent to the edge of the ring.

The crowd is treated to boxing-like play-by-play comments from a speaker: “This is crazy! What a clash!”

The Kuji region is one of the nation’s top producers of Japanese Shorthorn cattle.

During the Edo Period (1603-1867), the beasts of burden carried salt collected from seashores in the area through the Kitakami mountain terrain to Morioka.

Bullfighting is believed to have evolved from the habit of the cattle to headbutt each other to decide which one would lead the caravan.

The first Hiraniwa bullfighting event was held in 1983 as a tourism activity.

Nowadays, organizers host four events between May and October every year in the Yamagatacho district of Kuji.

The district is known for its clusters of white birch and as the host of the only bullfighting event in the Tohoku region.

But the Hiraniwa fights are not showdowns between the bulls.

Before one animal can win, people called “seko” intervene by pulling on ropes attached to the bulls and even standing between the competitors.

All fights are declared draws.

The rule is designed to prevent the bulls from tasting defeat and acquiring a habit of losing.

Most of the bulls in the Hiraniwa event are young and expected to be sold later as fighting bulls to areas with bullfighting bases, such as Niigata Prefecture.

“We hold the reins and run around with the bulls, then make the fight end in a tie. That is our tradition,” said Toshiyuki Kakiki, who works as a seko.

The nature of the event “is not violent nor savage,” he said. “The owners of the bulls have raised them endearingly and treated them kindly, and I hope people can feel that, too.”

Mai Minagawa, 33, took her daughter, Kanna, 6, to the season opener.

“I feel proud of the (bullfighting) as a local culture and hope the next generation inherits it,” the mother said.

Kanna said, “I was surprised to see the bulls clash with such a big noise.”

“We want to work together with younger generations and continue to keep the one-and-only bullfighting event in Tohoku alive,” Yaezakura said.