EDITORIAL: Quad’s mission must be to build an inclusive regional order 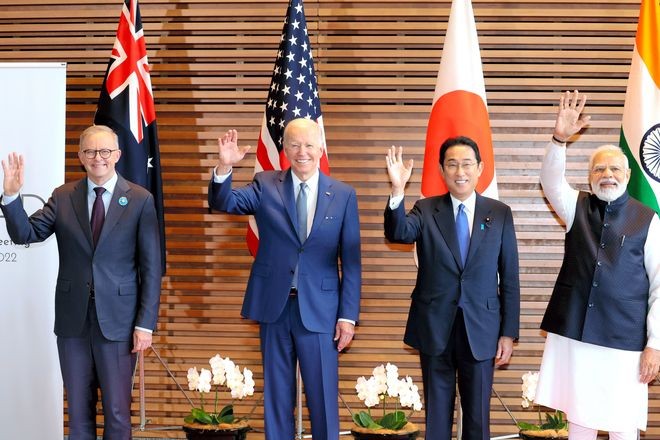 The world today requires an international order that is based on rules, not on the desires of major nations.

We hope to see the Quad serving as a framework that leads diplomatic efforts to achieve this aim in the Indo-Pacific region.

The leaders of Japan, the United States, Australia and India met for their Quad summit in Tokyo on May 24.

Since the last face-to-face Quad summit was held last autumn in Washington, D.C., the global security environment has changed dramatically because of the Russian invasion of Ukraine.

According to the joint statement, the leaders discussed the ongoing "tragic humanitarian crisis" and reaffirmed their resolve to "strongly oppose any coercive, provocative or unilateral actions that seek to change the status quo."

What needs to be done to avert a similar situation in Asia? It was of great significance that the Quad members vowed to “seek a peaceful resolution of disputes in accordance with international law.”

Neither China nor Russia was mentioned by name in the statement, but it was obvious that these two great authoritarian powers were in the minds of the Quad leaders. However, a considerable gap in perception exists between India and the rest of the membership.

In addition to its historically close ties with Russia, India also believes in omnidirectional diplomacy. But this time, a strong sense of crisis must have driven Prime Minister Narendra Modi into agreeing with his three Quad partners on respecting the integrity of sovereignty and territory.

India has been invited to attend the Group of Seven summit in Germany in late June. This is because the Western nations want to involve India in the creation of a new international order. But Japan, the United States and Europe should also be wise enough to humbly listen to what India has to say.

At the start of the Quad summit, Modi ventured to mention the importance of creating an inclusive community.

Indeed, the Quad must never be an exclusionary framework. To prevent causing a rift in Asia, akin to the East-West divide in Europe, the Quad must definitely aim for an international order that engages China.

The Quad nations indicated their intention to forge closer relations with ASEAN, and announced they would extend more than $50 billion (about 6.3 trillion yen) of infrastructure assistance and investment in the Indo-Pacific region over the next five years.

Mindful of China's Belt and Road Initiative, the purpose is to boost aid to debt-ridden and poverty-stricken developing nations.

The joint statement also mentioned cooperation in broad areas, such as providing satellite information for disaster relief, as well as battling infectious diseases and climate change.

In fact, people around Asia are living in dire conditions because of the climate crisis and armed conflicts. As a premise for instilling values such as democracy and the rule of law, providing humanitarian aid and working to eradicate poverty is a wise approach.

Asia is still without a close-knit regional organization of the type that Europe has.

This is precisely why the most realistic path is to build multiple layers of loosely knit multinational frameworks, such as economic zones, and proceed step-by-step to establish a new order.

We hope the Quad will aim to act as a fair promoter of such undertakings.