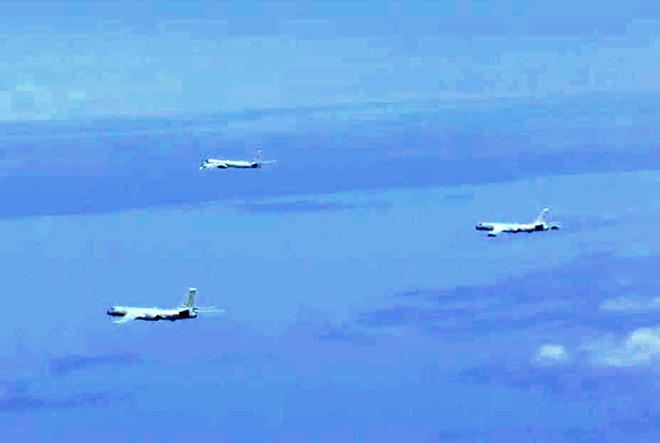 Chinese and Russian bombers jointly flew for an extended distance near Japanese waters on May 24, when the Quad summit was being held in Tokyo, Defense Minister Nobuo Kishi said.

He said the Japanese government has relayed its “grave concern” about the bombers’ flights to both countries through diplomatic channels.

Kishi said the latest incident was “more provocative than past cases because it was staged when the Quad meeting was held.”

The Quad summit, attended by Japan, the United States, Australia and India, was held as international concerns have risen about Russia’s invasion of Ukraine and China’s military buildup.

According to Kishi, in the morning and afternoon of May 24, two Chinese bombers were joined by two Russian bombers over the Sea of Japan after flying from the East China Sea.

The four bombers then jointly flew toward the East China Sea.

The two Chinese bombers were replaced by two other bombers believed to be Chinese, and the four bombers made a return journey between Okinawa’s main island and Miyakojima island.

Kishi said the bombers flew far over the Pacific Ocean in a rare move, but they did not violate Japan’s airspace during the long flight.

The government also found that a Russian reconnaissance aircraft flew over international waters off Rebun island in Hokkaido to the sea off the Noto Peninsula in Ishikawa Prefecture on May 24, Kishi said.

This is the fourth time that the two countries' military aircraft jointly flew for an extended distance.

(This article was written by Kaigo Narisawa and Naoki Matsuyama.)