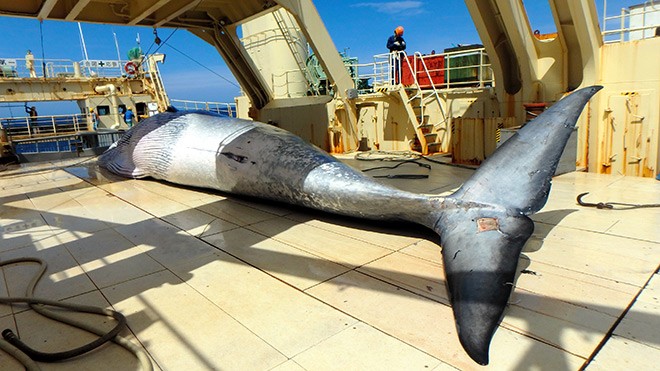 A Bryde’s whale unloaded on the Nisshin Maru (Provided by Kyodo Senpaku Co.)

Japan’s largest whaling company is banking on a new mother ship to pull the industry out of the doldrums.

Kyodo Senpaku Co. plans to complete the vessel, which measures more than 100 meters in length, in March 2024 as a successor to its aging Nisshin Maru.

The company will procure the cost, estimated at 6 billion to 7 billion yen ($47 million to $55 million) on its own, except for the 300 million yen in subsidies to be provided by the city government of Shimonoseki, Yamaguchi Prefecture.

“We will continue whaling for 30 more years after the ship is up and ready,” he said at a business fair for restaurant industry officials held in Tokyo on May 16. “Please don’t worry. Our industry will be revived.”

His remark was the flip side of the concerns being voiced over the industry’s future.

Japan resumed commercial whaling in July 2019, a month after it withdrew from the International Whaling Commission.

Japan was allowed to catch more than 300 whales a year in the Antarctic Ocean in the name of research whaling when it was an IWC member.

But commercial whaling is not allowed in the Antarctic under an international treaty.

The new vessel will replace the Nisshin Maru, built more than 30 years ago, to serve as the mother ship in Kyodo Senpaku’s whaling fleet.

Whales captured by catcher boats are dissected and preserved on board the ship.

A 5-meter-long miniature model was seen undergoing a demonstration test on May 19 in a gigantic pool that measures 220 meters long and 6 meters deep at Akishima Laboratories (Mitsui Zosen) Inc.’s research facility in western Tokyo.

The test was designed to take measurements of the water’s resistance and determine, among other things, if the vessel lives up to the designed performance.

Construction of the ship will begin in February if no problems are to be found with its design. Shimonoseki-based Kyokuyo Shipyard Corp. has received the order for building the vessel.

Kyodo Senpaku’s annual whale meat production has dropped to about 1,600 tons, down from about 2,400 tons under the scientific whaling framework.

The company, which posted an operating loss of more than 800 million yen in the business year ending in March 2021, hopes to return to the black in the current business year through hikes in whale meat prices and cost reductions.

However, an expansion in the government-designated catch limit would be indispensable if the company were to finance the construction of the new ship.

In counting on such an expansion, the ship is designed in such a way that it can be used to dissect fin whales, large cetaceans that Japan has voluntarily refrained from catching.

A Fisheries Agency official warned against any wishful thinking.

“The catch limit is determined only on scientific grounds,” the official said. “It may be expanded, but it may also be reduced.”

A possible catch limit expansion would not be the end of the story.

It remains uncertain whether domestic whale meat consumption can be expanded, or even maintained, when fewer Japanese remember whale meat as a familiar food item.