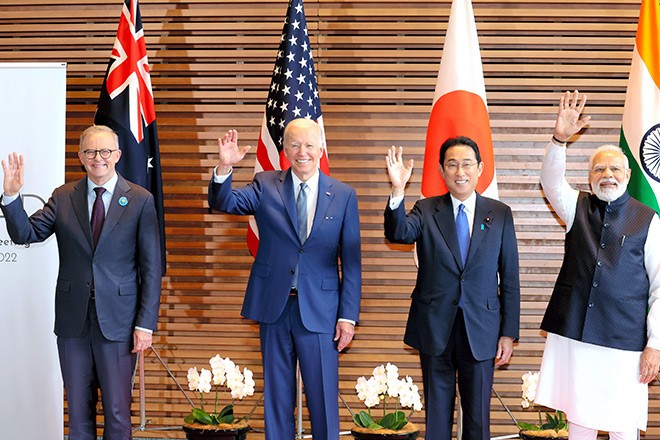 Although the Quad arrangement was intended to counter advances made by China, the four Quad leaders issued a joint statement on May 24 that did not mention China’s name.

Russia’s name was also excluded from the statement issued by the Quad countries of Japan, the United States, Australia and India.

Biden spent most of his opening statement criticizing Russia for its invasion of Ukraine. The joint statement issued by the four leaders also touched upon the humanitarian crisis in Ukraine.

But the statement only said the four leaders “reiterated our strong resolve to maintain peace and stability in the region.” It did not name Russia.

The statement was also much weaker than what Kishida said at the joint news conference with Biden the previous day.

The Japanese leader criticized “unilateral attempts to change the status quo using force, such as Russia’s invasion of Ukraine.”

The word “invasion” was replaced with “conflict” in the statement.

As host of the Quad meeting, Kishida said at a news conference on May 24, “During the session in which India participated, concerns were expressed about the tragic conflict.”

Due to the long historical ties between India and Russia, India has not openly criticized the Russian invasion of Ukraine.

The exclusion of Russia’s name from the Quad joint statement shows the consideration given to India by the three other nations.

The four leaders did agree to provide at least $50 billion (about 6.3 trillion yen) for infrastructure support and investment in the Indo-Pacific region over a five-year period.

The plan was clearly intended to counter China’s Belt and Road Initiative designed to link China with Europe by passing through Asia and Africa with infrastructure investments.

Kishida said at the news conference that concerns were raised during the four-way meeting about attempts to unilaterally change the status quo in the East China Sea and South China Sea.

Yet, no specific mention about China was made in the joint statement.

“(Quad) is not designed to respond to specific nations,” Kishida said.

He added that the four leaders also discussed the situation in Myanmar as well as North Korea, and the four nations confirmed they would cooperate in seeking the complete denuclearization of North Korea.

The Quad leaders also agreed on the need to immediately resolve the issue of Japanese nationals abducted by Pyongyang.

The four leaders also said they would share their satellite information with nations of the Indo-Pacific region to strengthen cooperation in providing support to deal with natural disasters.

In addition, the four leaders agreed to hold annual Quad summits, with next year’s meeting scheduled to be held in Australia.

(Ryutaro Abe contributed to this article.)