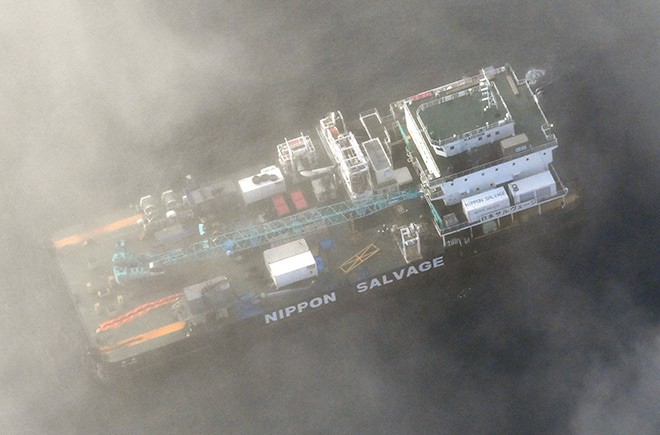 The salvage barge Kaishin is seen in waters off Shiretoko Peninsula in Hokkaido on May 24 after the vessel dropped the sunken Kazu I tour boat. (Kotaro Ebara)

The Japan Coast Guard plans to restart the salvage operation of the sunken tour boat Kazu I from scratch after the vessel dropped even deeper into the sea during the first attempt.

The operation team lifted the Kazu I up to near the water’s surface from the sea bottom, about 120 meters deep, off Shiretoko Peninsula in Hokkaido on May 23.

But the boat dropped to the ocean floor at a depth of about 180 meters on May 24 while it was being towed by the salvage barge Kaishin to a shallower area off Shari Port in Hokkaido. It was planned to be hoisted completely out of the water in the late afternoon that day.

The first attempt failed when two of the five nylon belts holding the Kazu I up buckled. They apparently snapped after they became worn from rubbing against the boat, according to the Coast Guard.

A remotely operated submersible, which was deployed to search the interior of the Kazu I, is equipped with high-performance arms that can reattach the belts to the boat.

The Coast Guard plans to again wrap belts around the Kazu I on May 25 and then raise it from the seabed the next day. The boat would then be moved to waters off Utoro Port in Shari before being lifted onto the barge.

The Coast Guard said it was notified by a crew member of the Kaishin salvage barge at around 10:20 a.m. on May 24 that it had dropped the Kazu I.

The remotely operated vehicle searched for the boat and found it lying upright on the ocean floor about 11 kilometers west of Utoro Port.

The boat appears to have not suffered serious damage from the drop, according to the Coast Guard.