LDP, other parties fall short of their goals for gender parity 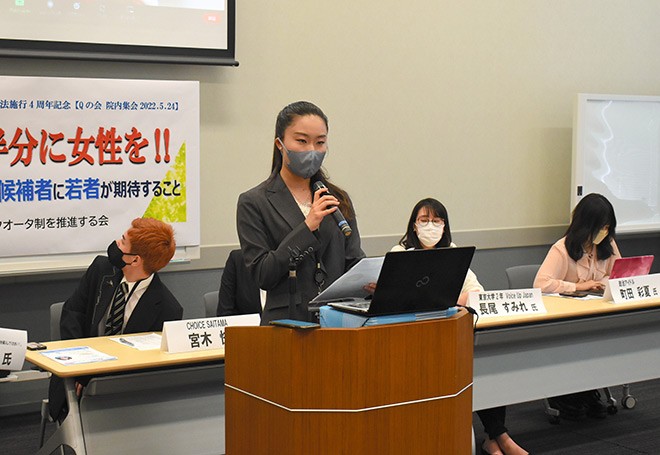 A citizens group pushing for more women participating in politics held a meeting on May 24, ahead of the Upper House election. (Takashi Togo)

Most political parties including the ruling Liberal Democratic Party have fallen short of their goals to have more female candidates running in the Upper House election this summer.

The Upper House election will be the third national election since the candidate election gender parity law came into force in May 2018. The law seeks to have the number of male and female candidates be as equal as possible.

“Only 10 percent of lawmakers are women," said Tomomi Inada, who is a Lower House member and deputy chair of the LDP’s Election Strategy Committee.

Inada attended a meeting at the Diet on May 24 held by a citizens group aiming to encourage women to participate in politics. She stressed the importance of having more women involved in the political arena.

“I want to work hard because I believe Japan’s democracy is being distorted,” she said.

Executives from eight parties who attended the meeting reported on the current status of fielding female candidates in the Upper House election.

Toshimitsu Motegi, the LDP secretary-general, said earlier this month the party intends to field about 30 percent of female candidates in the proportional representation constituency.

But fewer than 20 percent of the current candidates are women. Inada said she wants to raise this figure.

The main opposition Constitutional Democratic Party of Japan wanted women to make up half of the candidates in the prefectural and proportional representation constituencies in the upcoming Upper House election.

The party stipulated the goal in its action plan formulated at the party convention in February. However, the party has currently reached its goal in the prefectural constituency but fell short when combined with the proportional representation one.

“We have to work a little harder,” said Chinami Nishimura, the CDP secretary-general. She added that the party is seeking to have more female candidates running in the proportional representation constituency.

The Democratic Party for the People has reported meeting its goal of having 35 percent of their candidates be women, with the percentage now at about 40 percent.

The Japanese Communist Party, which set a goal of having half of its candidates be women, has almost reached its goal.

The Social Democratic Party, which set the same goal, said about 40 percent of its candidates are women.

On the other hand, about 10 percent of the candidates for the junior coalition partner, Komeito, which did not specify its goal at the meeting, are women.

“We recognize this as a big challenge,” said Noriko Furuya, a vice representative of Komeito. “We will continue working to increase the number of female candidates as much as possible.”

Nippon Ishin (Japan Innovation Party) also didn’t mention a goal, but reported that about 35 percent of its candidates are women.

“I encouraged many women to run, but they were still reluctant,” said Mitsuko Ishii, a member of Nippon Ishin and an Upper House member.

(This article was written by Issei Sakakibara and Mari Fujisaki.)