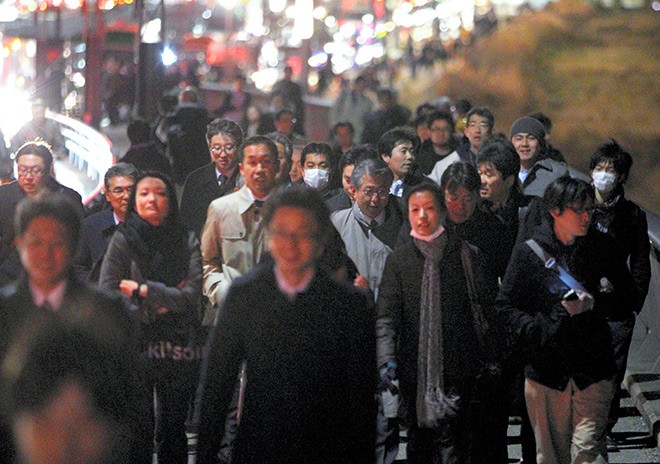 Up to 6,200 people could die in Tokyo should a mega-earthquake occur directly beneath it, the Tokyo metropolitan government said in its first review of anticipated damage in 10 years.

It released the estimate on May 25.

The metropolitan government’s disaster-prevention panel of experts drafted a report on the estimate, which dealt with four scenarios.

The first is an earthquake occurring directly beneath the southern city center of Tokyo. The second is a magnitude-7.3 quake occurring beneath eastern Tama, a suburb of Tokyo.

The third is a magnitude-7.4 tremor occurring within the Tachikawa fault zone.

And the fourth is equivalent to the magnitude-8 class Great Kanto Earthquake that occurred in 1923.

The estimate for each scenario was based on it striking at 6 p.m. in winter and with a wind velocity of 28.8 kph, when the air is dry, and many people are lighting fires.

In the first scenario, the focus of the earthquake would be near the southern part of Tokyo's 23 wards.

About 60 percent of the 23 wards, mainly in the eastern and southwestern parts of the wards, would be hit by a seismic intensity of an upper 6.

In some areas in the Koto, Edogawa and Arakawa wards, with rivers and bays nearby, the seismic intensity would reach 7.

It is estimated about 6,200 people would die from the earthquake, while 194,400 buildings would be damaged by the quake or from fires, and 4.53 million people would experience difficulties returning home.

But the latest damage estimate is smaller than the estimate the metropolitan government made in 2012.

In the 2012 estimate, the officials anticipated that the most damage could occur in a magnitude-7.3 quake in northern Tokyo Bay.

It is impossible to compare the two as the focuses in each scenario are different.

Still, the latest death toll estimate is about 3,500 fewer than the 2012 estimate.

The latest building damage estimate is about 109,900 buildings fewer than the 2012 estimate.

The diminution is more than 30 percent in both cases.

The metropolitan government said the latest anticipated damage is less than the 2012 estimate because the rate of earthquake resistance, which satisfies the current aseismic standard, is 92 percent as of 2020, up 10.8 percentage points from the end of fiscal 2010.

The government also said zones densely packed with wooden buildings have been halved, and the streets have become less flammable.

In the second scenario, an earthquake with a seismic intensity of an upper 6 would hit about 20 percent of the Tama area, including Mitaka, Higashi-Kurume, Kodaira and Musashino cities.

It is the first time for the metropolitan government to do a damage estimate for this type of earthquake.

In the first and second scenarios, the possibility of occurrence for each quake in the next 30 years somewhere in the entire Minami-Kanto area is 70 percent.

In the third scenario, the possibility of occurrence of the quake in the next 30 years is between 0.5 percent and 2 percent.

The third scenario has a quake with a seismic intensity of 7, with violent tremblers occurring in nine municipalities, such as Musashimurayama and Akishima, and about 1,500 people are estimated to die.

The death figure is down about 1,100 from the estimate made 10 years ago.

The fourth scenario's trench-type earthquake is caused by the shifting of two major tectonic plates. The odds of its occurrence in the next 30 years are estimated between 0 and 6 percent.