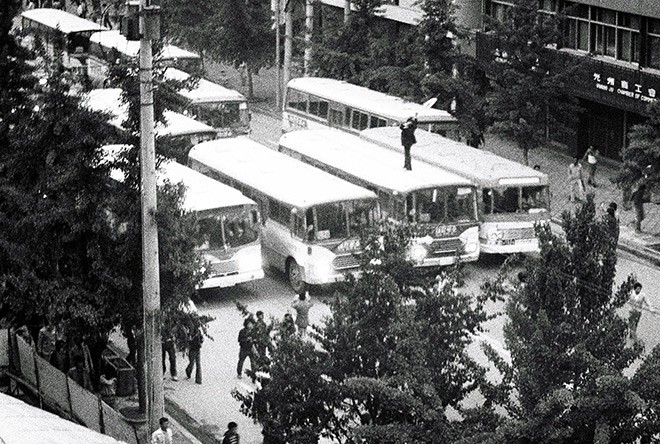 Joined by busses and taxis, students and other protesters march toward the military that was suppressing the uprising in Gwangju, South Korea on May 20, 1980. (Katsuo Aoi)

GWANGJU, South Korea--Local researchers here are examining hundreds of rare photos taken by a Japanese photographer of protesters brutally oppressed by the military in 1980 in an uprising in South Korea’s struggle for democracy.

The hope is they will be able to piece together more details of how the events unfolded there 42 years ago.

His daughters, who live in Osaka Prefecture, attended a ceremony of a photo exhibition marking the offering of his photos to a local museum in Gwangju on May 24.

Aoi, alongside Tadaomi Saito, an Asahi reporter covering city news at the Osaka Head Office, entered Gwangju in 1980 from May 19 to 23 and returned there from May 27 to 28.

The duo documented the mass protests against the South Korean military government and the military’s bloody crackdown on demonstrators in the city, which was under a military blockade.

Some of Aoi’s photos were later carried by his newspaper. But he also brought back to Japan many rolls of film that were never published.

His relatives discovered them in 2020. There were 247 such photos, including 57 color photos that were uncommon back then.

The photos captured the fierce crackdown, showing soldiers with clubs striking youths who emerged from a bus after tear gas was thrown into it. They depict dozens of bodies, apparent victims of military suppression, lined up in a morgue. And they show a broadcast station in flames.

The Gwangju Uprising is considered a pivotal moment in South Korea’s move away from military dictatorship to democracy.

In the uprising that began on May 18, 1980, about 240 people were either killed or went missing. To this day, researchers are still trying to uncover all that occurred and those responsible for the brutal violence.

The May 18 Democratic Uprising Archives, a museum set up by Gwangju city government to collect and exhibit evidence of the uprising, came to learn about Aoi’s photos and requested to examine them for research.

The Asahi journalists had entered the city the day after the mass protests began--earlier than other foreign media.

“We are hoping that studying the circumstances of where and how the photos were shot would unveil more details of what really happened,” said Go Ga-yeon, a researcher with the archives.

Go said comparing photos of the same scene shot from different angles and places could provide clues as to how events transpired and uncover things previously unknown. She also said the study of Aoi’s photos will bring attention to the crucial role that foreign journalists played in reporting on the movement.

At the ceremony on May 24, Hong In-hwa, head of the museum, expressed appreciation for Aoi’s relatives for their gesture to provide the photos for the research.

Hironori Sugibayashi, managing editor of the Asahi’s Osaka Head Office, said in a statement that he hopes “the exhibition will contribute to friendly relations between Japan and South Korea.”

Mari and Yuka were both elementary school students when the Gwangju rebellion took place and said they knew nothing about it.

“My father never talked about his job,” Mari recalled. “We were not interested in things taking place in South Korea at that time, either.”

The women said they realized how dangerous it was when their father was taking photos of the clampdown after hearing the tape of his account left on the computer for the first time.

It was a recording of Aoi’s interview by a South Korean news outlet in 2016, the year before he died.

“I counted 30 or so bodies in a hospital morgue,” he said. “I hid in a toilet of a hotel to shoot (photos of a youngster being beaten by soldiers).”

Aoi visited South Korea on assignment for a separate feature project. He headed to Gwangju after the head of Asahi’s Seoul bureau contacted him about the rebellion.

He recalled that he was preparing to write his will as death did not seem a remote possibility, given the city was sealed off by the military.

The daughters watched “A Taxi Driver,” a 2017 South Korean film about the uprising based on a true story of a taxi driver and a German journalist, to learn more about what their father witnessed in Gwangju.

They said some scenes looked like they were right out of their father’s photos.

The ceremony paying tribute to Aoi’s photos brought his daughters to the city he risked his life documenting on what was unfolding.

“My father would be stunned if he knew we were now in Gwangju, a city that came to be known as the sanctuary for democracy,” Mari said.

(This article was written by Hajimu Takeda and Kiyohide Inada in Gwangju.)